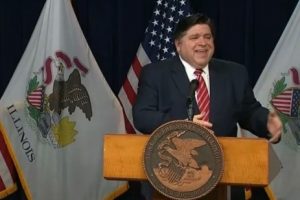 Gov. J.B. Pritzker takes questions from reporters Friday, May 29 during his 82nd daily COVID-19 briefing in Chicago. The governor announced he will no longer hold the briefings on each week day, but will call them on an as needed basis going forward. (Credit: BlueRoomStream.comn)

The governor’s Community Recovery Executive Order codified those changes while emphasizing the need for face coverings. It also extends the ban on residential evictions and utility shutoffs.

It was Illinoisans, he said, who made the easing of restrictions possible.

In the past four weeks, there was an average of 250 fewer novel coronavirus patients admitted to hospital intensive care units, or a drop of 20 percent, Pritzker said. And in the past two weeks, there was a 32-percent decrease in the number of COVID-19-related deaths.

“The significant personal pain that Illinoisans are feeling from this pandemic does not end with our stay-at-home order. Indeed, it’s more important than ever to support our working families as we begin our safe recovery,” the governor said. “The journey to this point has seemed very long and, unfortunately, the journey is far from over. Let’s be clear on this: the virus is still out there and it’s very dangerous.”

Residents must continue to follow the Illinois Department of Public Health’s guidance — frequent handwashing, regular sanitation of commonly-touched surfaces, use of a face covering when in public and observation of social distancing.

And when travelling to neighboring states that instill fewer restrictions than Illinois, he added, people should not participate in activities deemed unsafe by epidemiologists.

Pritzker also announced the end to his 2:30 p.m. daily briefings. Those will be held on an as-needed basis moving forward.

The state’s total is now 117,455 confirmed cases and 5,270 virus-related fatalities. Cases were reported in all but one Illinois county.

“We must learn to coexist with COVID, and will coexist until we find proven treatments and a vaccine,” Ezike said. “Please be safe as we head into this weekend into phase 3. I trust all of you and your communities will model safe practices — social distancing and wearing face coverings — to minimize the transmission of this virus.”

“I’ve said from the very beginning that I would never do anything to break up a service, to interfere with religion,” the governor said. “What I have done is implored leaders not to gather their parishioners because what we want most of all is for people to be healthy and safe.”

Illinois’ contact tracing efforts are “ramping up,” Ezike said. Residents may receive a phone call or text message from an agent notifying them of possible COVID-19 exposure.

The system has about half the reach it needs, Pritzker said, and officials are “rapidly” trying to grow the program. More than 80 local health departments are working with the state to build that needed capacity.

Contact tracers will never ask for financial information, social security numbers or any other sensitive information. If someone does, it is likely to be a scam, Ezike warned.

“We’re lucky that that video was ever taken because that is happening around America probably every day and unfortunately, time and time again — even when these videos come out, even when so many of us have the feeling of, ‘it’s time for a major change,’ and we work toward that change — somehow for Black America, it never really comes,” Pritzker said. “And that’s unacceptable.”

In response to a reporter’s question, he said he long called out U.S. President Donald Trump for being “a racist, a misogynist, a homophobe (and) a xenophobe.”

“His tweets, his reaction, his failure to address the racism that exists in America, his stoking of the flames in sometimes subtle and sometimes not-so-subtle ways is completely unacceptable,” Pritzker said. “It’s reprehensible. In fact, and I’m outraged by what he does in response to these situations.”