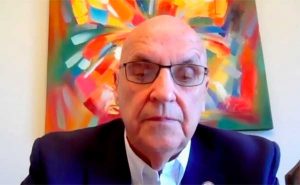 SPRINGFIELD — Three Republican lawmakers on Friday, Dec. 4, put pressure on Illinois Department of Employment Security officials to answer for the backlog in unemployment claims and the rising number of fraudulent unemployment claims filed, which has reached nearly 297,000 since March.

During a Zoom news conference, state Reps. Tom Bennett, R-Gibson City, Terri Bryant, R-Murphysboro, and Mike Murphy, R-Springfield, urged Gov. J.B. Pritzker to call a special legislative session and allow for hearings to address the agency’s delays in processing unemployment claims, as well as the 296,914 fraud claims that had been filed as of Nov. 19, according to IDES.

“You (Gov. Pritzker) should lead at this point and call us into special session to address many of these issues,” Bryant said. “I’ve said before, and I’ll repeat it again: Congress is meeting; other state legislators are meeting. We met safely in May with nobody contracting COVID-19, so we know it’s possible.”

Murphy said his office continues to hear constituent complaints about delays in receiving unemployment benefits, and about fraudulent claims being made on their behalf.

“As a matter of fact, during this press conference, I just got a text message from a constituent who said that they haven’t got a call back in over 30 days,” Murphy said. “But the majority of my complaints, recently, have been in regards to fraud.”

Bennett said the lawmakers must begin with finding the facts and answers to outstanding questions.

“The problem is we’re not getting the answers on why there are so many failures going on. We need to be able to figure out why the administration and IDES can’t handle the job requirements. We know that COVID-19 has changed everything in so many ways, but we got to be able to respond,” Bennett said.

When asked about the dollar amount associated with fraudulent employment claims in Illinois, Bryant said they don’t have enough information to determine how much the state has paid out in fraud claims.

“We don’t have an answer on the dollar amount because we’re not sure yet on what is actual fraud, and what’s being called fraud,” Bryant said. “How do we know what is fraudulent and what is real, until we’re able to have some hearings on this and get some answers?”

Last month, IDES acting Director Kristin Richards spoke during Pritzker’s daily briefing to share how the agency has lessened the long delays that unemployment claimants have faced, by increasing IDES staff and implementing a “callback only” system, in which calls are returned in the order they are received.

Richards said the agency handled more claims in the first three weeks of the pandemic than it had during all of 2019.

In order to meet this enormous demand, IDES increased its call center staffing by about 600 percent, Richards said on Nov. 23. She said the agency also redeployed about 100 staffers to deal with claims maintenance and adjudication, and brought back dozens of retired workers.

As a result of these changes, Richards said many claimants are now receiving callbacks “within one to two weeks or less.”

In an email, an IDES spokesperson said the agency has paid out nearly $19 billion in benefits since March, which is more than 16 times the amount of benefits paid over the equivalent period in 2019.

“As IDES has been saying for months, we are working hard to respond to an economic crisis and stand up five new, complex federal programs while battling fraudsters who have used stolen identities to file for benefits nationwide,” wrote IDES Information Strategy Director and Public Information Officer Rebecca Cisco.

IDES reported last month that the state’s unemployment rate dropped to 6.8 percent in October, down from 10.4 percent in September. Meanwhile, the total number of nonfarm jobs in the state fell by about 1,100, to roughly 5.7 million.

The state agency reported more than 74,000 newly filed regular unemployment claims for the week ending Nov. 28, which is a 13 percent increase from the prior week.

According to U.S. Department of Labor data, 228,583 Illinoisans filed new claims for extended benefits under the PEUC for the week ending Nov. 14, which is roughly 10,000 more than the week before. During the same period, nearly 144,000 self-employed workers were receiving continuing benefits under the PUA.

Both the PEUC and the PUA programs are funded entirely by the federal government, and were created under the federal Coronavirus Aid, Relief and Economic Security, or CARES Act, which Congress passed in March. Funding for those programs is set to expire Dec. 26.