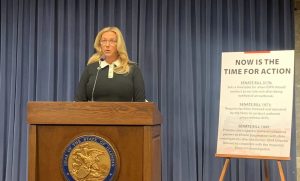 Sen. Sue Rezin, R-Morris, talks Thursday, March 10 at the State Capitol in Springfield about bills she has reintroduced in response to a COVID-19 outbreak in 2020 at the LaSalle Veterans’ Home. (Capitol News Illinois photo by Grace Kinnicutt)

SPRINGFIELD – Sen. Sue Rezin, R-Morris, said she wants to ensure quicker and better responses in future cases of virus outbreaks at state homes for veterans after what she called a “failure” to adequately protect residents at the LaSalle Veterans’ Home during a COVID-19 outbreak in 2020.

She’s reintroduced legislation to address shortcomings in the state’s response to the outbreak, but on Thursday, March 10 called for more help from lawmakers to advance the bills which remain in the Assignments Committee.

“The residents of the Veterans’ Home served and protected our nation when we needed it,” Rezin said during a news conference March 10 at the Capitol in Springfield. “But when they needed us to serve and protect them, our state and our governor failed.”

The LaSalle home notified the Illinois Department of Veterans’ Affairs on Nov. 1, 2020, of two veterans and two employees at the facility testing positive for COVID-19. Within a week, 60 veterans and 43 staff members had the coronavirus.

A state watchdog report found multiple failures that contributed to 36 veterans’ deaths during the outbreak.

The Illinois Department of Human Services’ Office of the Inspector General’s investigation determined that a lack of comprehensive, documented COVID-19 plans and policies which included the absence of any standard operating procedures in the event of an outbreak played a significant factor in the LaSalle facility’s inability to contain the virus.

Two weeks after the outbreak began, the Illinois Department of Public Health and the United States Department of Veterans Affairs visited the site to observe infection control practices.

Rezin also called it a “failure” of his administration that Gov. J.B. Pritzker wasn’t fully briefed on the outbreak until nine days after it began.

So Rezin is sponsoring Senate Bill 3170, which would require that a veterans home administrator provide written notification to IDPH and IDVA within 24 hours of learning of a second case of an infectious disease.

Another bill, SB1471, would require facilities licensed and operated by the state to conduct outbreak-related preparedness drills.

The Human Services’ department’s report found that the LaSalle home had not created a COVID-19 task force or committee for leadership and supervisors to establish responsibilities for managing and monitoring the virus. That, the report said, resulted in confusion among staff and led to tasks being left undone.

“The unstructured approach caused complications and cross-contamination of positive and negative veterans,” the report said.

The report recommended staff be retrained on personal protective equipment requirements, replacing the nonalcohol-based hand sanitizers with alcohol-based ones, and improving the temperature check process for employees’ arrival at work.

It further states that the lack of preparedness caused confusion among staff members and that several employees indicated one of the COVID-19 units was unprepared to deal with the influx of COVID-19 positive residents. It’s stated that the “unstructured approach caused complications and cross-contamination of positive and negative veterans.”

A third bill, SB1445, would provide the inspector general subpoena powers that ensure cooperation with state investigations after LaVia refused to cooperate with the investigation.

Rezin’s bills have been stuck in the Senate’s Assignments Committee for the past year waiting to be assigned to a substantive committee. Rezin said she has written letters to get the bills called out of Assignments, but has been “shocked and frustrated” that she has not gotten these bills called from her Democratic colleagues.

“We must put these policies and procedures into state law ensuring proper and effective responses undertaking no matter who is in charge,” Rezin said. “It’s time we honor the obligation we have to our veterans and their families by solidifying these into law.”