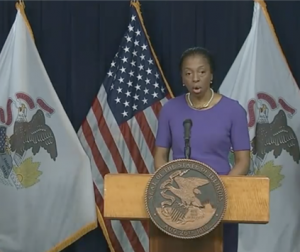 SPRINGFIELD — Illinois officials on Sunday, March 29 announced the largest one-day jump in confirmed novel coronavirus cases and deaths in the state yet. But public and private labs’ per-day testing ability is also higher than it has ever been.

The Department of Public Health identified 1,105 new cases and 18 deaths, putting the state totals at 4,596 cases in 47 counties and 65 related deaths.

Gov. J.B. Pritzker said “we have weeks to go” before Illinois reaches a peak in new COVID-19 cases, expected “sometime in April.” One of his priorities, he added, is to increase the state’s testing ability.

Five days ago, three state labs, four commercial facilities and 15 hospital labs processed 2,000 tests per day. The governor said that capacity is up to 4,000 daily with a goal of hitting 10,000 daily in the next 10 days.

“That marker is significant because it’s the number of tests per day that the scientists and experts tell us that we need to get a truly holistic understanding of the virus in each of our 102 counties,” Pritzker said. “…This 10,000-a-day marker will give us the data to run a more mathematically significant model that offers us improved insight into how well our interventions are working.”

“Ultimately, my goal is to reach a large enough testing capacity where we’re able to test everyone who needs a test on a regular basis,” Pritzker said. “… Every day we aren’t hitting 10,000 tests or more is another day that we’re not able to get answers that help us get past this current crisis.”

He called the federal government’s lack of action in February a “profound failing” and “foundational mistake” that state officials had to correct. Although President Donald Trump’s administration moved to upgrade its testing response, “we still have far to go,” Pritzker said.

And while Illinois awaits the additional tests federal officials promised — which “may never be fulfilled,” the governor said — state leaders are taking other actions to address testing capacity.

“More testing available across the board will better inform the amount of virus we are seeing in the community, where we can take that information and identify specific concerted efforts to decrease the risk in those high-risk areas,” Ezike said, “ultimately with the goal of limiting infection, limiting spread and ultimately limiting lives lost.”

Two executives from Abbott Laboratories, a medical devices company based in Illinois, “expressed their real dedication” to help the state acquire five-minute rapid COVID-19 tests, Pritzker said. And once other materials needed to process tests are acquired, a third shift of technicians will be added to all three of Illinois’ laboratories.

There are also five drive-thru facilities now — three federal Health and Human Services ones; in Bolingbrook, Northlake and Joliet; and two operated by the Illinois National Guard, in McLean County and Harwood Heights.

Testing priority dictates symptomatic first responders, health care workers, seniors and those with underlying conditions receive one first at those sites, which are permitted by federal guidelines to run only 250 tests per day.

“Of course, we can’t just test — we have to treat,” Pritzker said. “And in order to treat people, we have to increase hospital bed capacity.”

The governor said he will provide additional updates about how his administration is doing that, as well as its progress acquiring personal protective equipment such as gloves, gowns and masks, in the coming days.

He did say, though, that Illinois is “acquiring millions of units” of equipment, most of it shared with facilities running through supplies quickly.

The 18 newly-reported deaths linked to the novel coronavirus were in Cook, DuPage, Kane, Kendall, LaSalle and St. Clair counties.

The IDPH updates its coronavirus website on Mondays, Wednesdays and Fridays. It also maintains a hotline for citizens who have questions about the virus or want to report suspected cases: 1-800-889-3931.