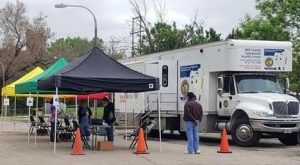 Community Health Center COVID-19 walk-in testing site held Nov. 30 in New Lenox in Will County. The IDPH is working with county and local health departments in offering testing sites throughout the state through Dec. 6. (Photo courtesy of Will Co. Health Dept.)

SPRINGFIELD – Another 125 people who tested positive for COVID-19 were reported to have died in the previous 24 hours Tuesday, Dec. 1, according to the Illinois Department of Public Health, bringing the death toll to 12,403 since the pandemic began.

That came as the state reported another 12,542 new confirmed or probable cases among 116,081 test results reported over the previous 24 hours. That brought the rolling seven-day average case positivity rate to 10.4 percent, the ninth day in a row it has hovered between 10 and 11 percent.

Since the pandemic began, the state has reported 738,846 confirmed or probable cases among more than 10.6 million tests conducted.

Gov. J.B. Pritzker said at his daily briefing on Tuesday that the new cases could have come from transmissions that occurred as many as two weeks ago, and potential Thanksgiving exposures will take longer to show up in testing results.

“That means if you didn’t socially distance at Thanksgiving, and you spent time with people who are not in your own family bubble, you may feel fine right now, but you could nevertheless be passing COVID-19 on to others without knowing it,” he said. “So for anyone who traveled or gathered with family and friends for the Thanksgiving holiday, monitor yourself for symptoms. And if you have any of those symptoms, stay home.”

He said those who traveled should get tested for COVID-19 between five and seven days after returning, even if they are not showing symptoms.

“This is the time to be extra careful with a surge of the virus expected,” he said, adding, “these next few weeks are a time to stay home as much as possible, assume you were exposed and assume more of your coworkers or friends were exposed than ever before, and act like it with social distancing, wearing your mask.”

That’s in an effort to keep the transmission curve as flat as possible as the state, nation and world await a vaccine. Pritzker said the state has now been told to expect 109,000 initial doses of a vaccine, although the number has fluctuated regularly. That would be able to treat 54,500 people, as each person needs two doses.

“Those vaccines, because of the limited numbers of them, will go almost all to health care workers and if there are enough then next to those in long term care facilities, the staff and the residents,” Pritzker said, noting they could arrive this month if they gain Emergency Use Authorization from the U.S. Food and Drug Administration.

Pritzker and Illinois Department of Public Health Director Dr. Ngozi Ezike said the vaccine will not be mandatory and high-risk individuals will be prioritized, although the distribution plan will continue to evolve.

“We’re going to have months of trying to get this vaccine out and we will continue to adjust,”Ezike said. “We’ll be following the data and the metrics to see who has been immunized, who has not, which parts of our senior population have been immunized… and then it’s a supply and demand thing… We don’t have enough for everyone to get it, so we will just be adjusting the distribution and the allocations to try to get as many of those high-risk people up front.”

While Ezike said it will be a monthslong process to roll out the vaccination effort, there are steps all Illinoisans can currently take to limit the spread of the virus.

“I want to remind people while we’re getting everybody vaccinated, we still can control this virus…by wearing our mask and not transmitting the virus in the circles that we’re already in so there’s a lot of work to be done by everyone,” she said.

Hospitalizations for COVID-19 remained just below second-wave highs, sitting below 6,000 for the fifth straight day after nine days above that threshold. As of Monday evening, there were 5,835 people reported hospitalized for COVID-19 in Illinois, including 1,192 in intensive care unit beds and 721 on ventilators.

The positivity rates in the state’s 11 COVID-19 mitigation regions ranged from 10.9 percent in Region 3, which includes the Springfield area and several surrounding counties, to 17 percent win Region 7, which includes Will and Kankakee counties.

To move back to Tier 2 mitigations from the stricter Tier 3, a region must remain below a 12 percent positivity rate for three consecutive days, have at least 20 percent of ICU and hospital beds available, and have declining hospitalizations on a seven-day average for seven of 10 days. Pritzker said Monday, Nov. 30, however, that no regions will be moved to Tier 2 “for the next few weeks even if they might be on track to meet those metrics.”

Pritzker said he could not answer exactly how long Tier 3 restrictions would be in place throughout the state.

“It takes really one to two incubation periods to really understand what the effect of a holiday is or the effect of some event is,” he said. “And if you count the number of days, that could be 28 days at the outset from Thanksgiving.”

He said the state will wait to see if the “surge upon a surge” resulting from Thanksgiving begins to show up in the numbers, which could begin in five to seven days.

Only Region 3 and Region 11, which includes only Chicago, had positivity rates below 12 percent as of Nov. 28, the latest data available. While Chicago had hospital and ICU bed capacity exceeding 20 percent, it only had decreasing COVID-19 patient hospitalizations for five of 10 days.

Region 3 had hospital capacity exceeding 20 percent, but had just 13.6 percent of ICU beds available, and COVID-19 patient hospitalizations decrease for only five of 10 days.

As far as enforcing the mitigation measures, Pritzker once again said the state relies on local municipalities.

“Ignoring them is putting the people who live in your area in peril,” he said. “And so I would urge law enforcement to listen to their public health departments, (and) state’s attorneys to follow the law. We need everybody’s help to make sure that we’re keeping people safe.”

He urged the U.S. Congress to “step up and include in the stimulus package support for restaurants and bars that have been so hard hit by the virus.”