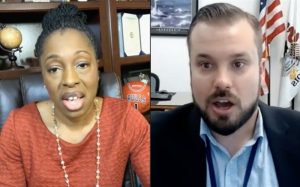 SPRINGFIELD – Illinois Department of Public Health Director Dr. Ngozi Ezike says the state is “getting close” to the next phase of reopening amid increasing COVID-19 vaccination rates and decreasing positivity rates.

Speaking in a Senate Health Committee meeting, Ezike said March 15 the state has been working on a phased reopening plan that could be announced by Gov. J.B. Pritzker later this week.

“We’ve been thinking about what the different benchmarks would be to start moving (to the next phase),” Ezike said Monday. “Maybe not just an on-off switch, but maybe a dial so there may be one more phase before we get to Phase 5.”

All of Illinois currently remains in Phase 4 of the Restore Illinois plan, which prohibits public gatherings of 50 people or more. According to the plan, Phase 5 is triggered when “either a vaccine is developed to prevent additional spread of COVID-19, a treatment option is readily available that ensures health care capacity is no longer a concern, or there are no new cases over a sustained period.”

With vaccination numbers continuing to improve as more doses are administered statewide, Sen. Terri Bryant, R-Murphysboro, asked Ezike when the state could expect to see a move to Phase 5 or a wider reopening.

Ezike said the Pritzker administration has been working on a phased approach to reopening over the course of the past month, the details of which she expects to be released “later this week.” The statement was confirmed by Jordan Abudayyeh, the governor’s press secretary Monday.

Ezike said the most important metric the state is monitoring to determine next steps to reopening is how much of the state’s most vulnerable populations have been vaccinated.

As of Tuesday, IDPH had reported that over 5 million vaccine doses had been administered in Illinois, with just over 1.8 million of those doses being given to residents over age 65.

“It really does involve how much of our most vulnerable population has been vaccinated, and of course that starts with our seniors,” Ezike said.

Ezike said that the state could begin to see a return to regular large-scale events once a “great majority” of the state’s senior population has been vaccinated.

However, Ezike stressed that when they resume, events and gatherings would still be subject to public health and safety guidelines including mask wearing, capacity limits and social distancing.

“We’re not getting rid of masks, we think masks have to continue to be a mainstay,” Ezike said.

During the committee hearing, some senators also asked Ezike and IDPH Deputy Director Andrew Friend about additional efforts by the state to achieve equity in vaccine access to all parts of the state, including urban areas and communities of color as well as rural, more isolated parts of the state.

On Friday, March 12, IDPH launched a new hotline to assist residents with limited access to technology in finding vaccination appointments. The hotline is staffed by 500 agents seven days a week from 6 a.m. to midnight. Services are available in both English and Spanish by calling 833-621-1284.

“While vaccine is still limited, our allocations are increasing significantly and we want all Illinoisans to have access as quickly and easily as possible,” Ezike said in a statement regarding the new hotline.

The state also announced on Monday a new rural vaccination program aiming to administer upwards of 1,000 doses of the single-dose Johnson & Johnson COVID-19 vaccine per day in downstate regions.

The program will be carried out by mobile vaccination teams from the Illinois National Guard who will support local health departments in their vaccination efforts. The program is set to begin this week in Fayette and Shelby counties before expanding to Moultrie and Clay counties.

Friend said that the state’s vaccination response continues to be “data-driven” in order to ensure that no parts of the state are lagging significantly behind any others.

“We look with an equity lens, so we want to get to parts of the state and communities where folks might not be being addressed,” Friend said.

“No matter if you’re in the city, the suburbs, or the rural community, we want to get everyone access to vaccine, and that’s the primary goal of these missions,” Friend said.

Public health officials announced Tuesday, March 16 an additional 1,997 new confirmed and probable cases of COVID-19 out of 51,240 test results. The state’s seven-day rolling case positivity rate stands at 2.3 percent, and has not moved more than a tenth of a percentage point for the past week.

A total of 78,287 doses of COVID-19 vaccines were administered statewide Monday. The state’s seven-day rolling average for vaccines administered stands at 102,564, the highest average to date.

As of Monday night, 1,152 individuals were reported to be in the hospital with COVID-19, and of those, 250 patients were in the ICU and 124 patients were on ventilators.

A total of 19 deaths were reported due to COVID-19 Tuesday, bringing the statewide death toll to 20,973 since the pandemic began.