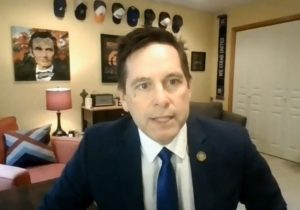 Springfield Republican Rep. Tim Butler speaks in a video conference Wednesday before the House met at the Bank of Springfield Center for legislative session. Butler and three other Republicans called for a House vote on Gov. JB Pritzker’s reopening plan, but he said he did not expect Democrats to go along with it. (Credit: Zoom.us)

SPRINGFIELD — House Republicans are calling for — but not expecting — a vote to be taken on Gov. J.B. Pritzker’s reopening plan this week while lawmakers are in Springfield for an abbreviated legislative session.

Before the legislative session began Wednesday, May 20 for the first time since March, four downstate members of the House GOP caucus hosted a video news conference arguing for more input from the General Assembly — a coequal branch of state government to executive authority. They also argued for a more regionalized approach.

“We are simply not facing the same challenges in most communities today as they are in Chicago, and yet decisions about reopening our businesses and communities are being made by the same single source — Governor Pritzker,” Rep. Dan Brady, R-Bloomington, said. “The governor needs to begin allowing for local input today, by agreeing to let members of the General Assembly weigh in on behalf of our communities and make needed changes to his reopening plan.”

The news conference concluded shortly before an estimated 150 Reopen Illinois protestors gathered outside of the Bank of Springfield convention center where House lawmakers would take part in the legislative session.

Pritzker’s Restore Illinois plan divides the state into four broad regions and considers health care and disease spread metrics when deciding whether each of the regions will be allowed to move into one the next of five reopening phases.

The whole state is in the second phase of reopening until at least May 29, when all are on pace to progress, per the plan. The current “Flattening” phase allows residents to visit golf courses and state parks, retail shops to deliver orders placed remotely, and medical centers to allow elective surgeries to resume.

The next phase, called “Recovery,” would allow offices, salons, barbershops and manufacturers to reopen with some capacity restrictions.

“Basically, any store that wasn’t already opened as an essential business can choose to open their doors to in-person shopping with (Illinois Department of Public Health) safety precautions and capacity limits in place,” Pritzker said of the next phase at his Wednesday briefing.

Bars and restaurants, however, would not be allowed to reopen for inside dining, even with capacity restrictions, until Phase 4 in the indefinite future. But Pritzker announced Wednesday that those facilities would be allowed to open for outdoor dining under the next phase, provided they follow social distancing guidelines. He said his office, in the coming days, will offer guidance as to how other outdoor recreation activities can reopen safely. 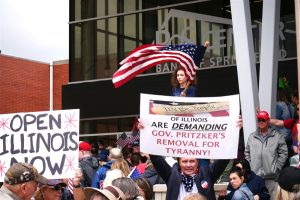 Protesters outside the Bank of Springfield Center in the capital’s downtown call for Illinois to reopen sooner than the timeline provided in Gov. JB Pritzker’s Restore Illinois plan. Members of the state House met inside the arena for the first of a three-day special session Wednesday. (Capitol News Illinois photo by Ben Orner)

While Pritzker has long touted that his is a data-driven approach recommended by doctors and epidemiologists, Rep. Ryan Spain, R-Peoria, said in the video conference that other localized plans rely on experts as well and should be given a fair hearing.

“This is incredibly disappointing for a governor that has said he’s following the data and the science. Well, we’re doing the same,” he said. “And if we’re not allowed to have meaningful input into the governor’s version of the Restore Illinois plan — the regional reopening plan for the entire state — then we need to allow smaller sub-regions to have their own plan and manage the conditions that they see and work with their own local health professionals, public health staff and other experts.”

Senate Minority Leader Bill Brady, R-Bloomington, also introduced Senate Bill 3993 this week, backed by the Illinois Chamber of Commerce, directing IDPH to establish the Safe Place of Business protocols on or before May 30 to give guidance to all businesses and allowing them to reopen once protocols are met.

“The proposal put forward by the Illinois Chamber is an important step in moving the discussion forward on how we safely reopen our state and get our economy moving forward more quickly,” Brady, who has called for public hearings on a reopening plan, said in a statement.

While Pritzker announced the planned loosening of some restrictions Wednesday, he did not indicate that he expects lawmakers to vote on his or any plans.

In his Monday daily briefing, Pritzker said he’s examined the various regional plans, and while he conceded there were many ways to break up the state for reopening purposes, the current plan is what was decided upon after consultations with experts.

“We’ve talked about the many, many plans that have been submitted. And I’ve read most of them, if not all, and some of them are well crafted, there’s no doubt about it,” he said Monday. “But ultimately, a decision had to be made about how to put a plan together for the entire state of Illinois, and regionalize it. And that’s what we did.”

On Wednesday, the governor said he has been “speaking to legislators throughout this process,” and Republicans complaints are being lodged now “maybe because they’re acting in a hyper-political fashion.”

Spain, however, said he doesn’t believe the issue is a partisan one, but is more about understanding regional differences.

“I don’t see the Restore Illinois plan as a Democratic plan and here we are proposing a Republican one that’s different on a party line basis. We need to have more input and collaboration for how we move forward as a state,” he said.

While the lawmakers are calling for the General Assembly’s input, Rep. Tim Butler, R-Springfield, said he believes Democrats don’t want to be put “on record” voting for the governor’s plan.

“I don’t think that the Democrats will agree with us on this,” he said in the videoconference Wednesday. “I think that’s the whole point, is the fact that the governor has enacted this massive government program, really, under Restore Illinois, without any input of the Legislature.”

A spokesperson for House Speaker Michael Madigan, D-Chicago, did not immediately return a request for comment as to whether a vote would occur.