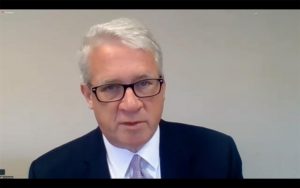 SPRINGFIELD – Republican members of the Illinois House of Representatives on Wednesday, May 6 criticized Gov. J.. Pritzker’s multi-phase plan to reopen Illinois by region, saying it does not act quickly enough to respond to the economic hardship caused by his stay-at-home order.

“We all know that the stay-at-home order was the right thing to do to stop the spread of the virus and protect our health care,” said Deputy House Minority Leader Rep. Dan Brady, of Normal.

“Unfortunately, the governor’s plan fails to recognize that local officials throughout the state want the same thing he does: a safe return from the pandemic,” Brady said. “Instead of offering any semblance of local authority to the people who are on the ground in the community, it continues to be a decree by one person.”

In the “Restore Illinois” plan that Pritzker unveiled May 5, state health officials will look at certain data metrics including hospital capacity and testing availability in four regions of the state in order to move each respective region through phases of reopening.

The regions are based on groupings of the state’s 11 medical districts: northeast, north-central, central and southern. The entire state is in Phase 2, which includes mandatory face coverings and allows non-essential stores open to just delivery and curbside pickup.

Phase 3 includes reopening non-essential stores, barbershops, offices and more with capacity limits. Pritzker said on May 5 the earliest a region will be allowed to advance to Phase 3 will be May 29. 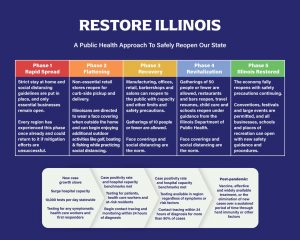 “And when we have that level of complexity, we need to have input from a wide variety of stakeholders to try to make the best decisions possible,” Demmer added. “We also have to consider the very real impact this is having on economies, on livelihoods and on people’s lives all across the state of Illinois.”

Phase 4 includes allowing up to 50 people in stores and restaurants, but Pritzker said Tuesday the earliest that could happen is the end of June. Phase 5, the final stage, is a full reopening of the state, but it relies on a widely available treatment or a vaccine, which are likely months – or even a year – away. Republicans argue that closed businesses cannot wait that long.

“Quite frankly this will force bankruptcy and the permanent closure of large and small restaurants throughout the state of Illinois,” said House Minority Leader Jim Durkin, of Western Springs. “This plan does not work.”

Durkin said business owners have been contacting him at a “rapid pace” since the reopening announcement, “all with the same feeling of despair and devastation.”

During his daily COVID-19 briefing Wednesday (May 5) in Chicago, Pritzker said he considers the opinions of Republican legislators in his decision making.

“I have talked to the leaders on the Republican side, many Republican legislators. I’m frequently reaching out, listening to them. I take a lot of notes, and I’ve done a lot of the things that they’ve asked along the way,” he said.

Republicans acknowledged that Pritzker’s latest extension of the stay-at-home order included multiple revisions that Republicans had suggested, including opening state parks and garden centers and allowing elective surgeries to resume.

Small business owners and employees face an uncertain near future, Republicans said, especially as many are still not able to access unemployment benefits through the Illinois Department of Employment Security. 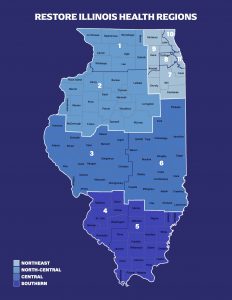 “These people are facing a tremendous stress and (are) really unsure about how they’re going to make necessary payments for their rent, their food, their mortgage, their medicine,” said Rep. Ryan Spain, R-Peoria.

Rep. Avery Bourne, R-Morrisonville, said one constituent told her she called IDES 157 times before finally getting through.

“This is really a broken, broken system,” Bourne said.

Despite frustrations, Durkin stressed that “The executive order right now is the law of Illinois. And I would not encourage anybody to break the law” by reopening their business.

Spain added, however, “If we’re waiting to open some things until the end of June or the end of July, I think it will continue to be difficult to ask all of our constituents and local communities to continue to comply.”

Pritzker on Wednesday acknowledged the difficulty that some have had applying for unemployment. He added that he will have a “complete presentation” on the state of unemployment later this week “so people can see what’s being done.”

Republicans also challenged Pritzker’s executive authority during the COVID-19 crisis, saying that executive action during the state of emergency should be temporary and that long-term plans like one to reopen the state should be decided by the Legislature.

“This plan presumes that the governor shall rule the state for the upcoming months, and possibly much longer, if the vaccination is not available,” Durkin said, stressing the Legislature is a “coequal” branch of government.

“I did not abdicate nor relinquish my elected responsibilities to the executive branch,” he said.

The Illinois Department of Public Health has provided the General Assembly with detailed guidance on how they could go about their duties in the Capitol.

“And we should take the department up on that offer,” Demmer said, “… and have the legislative process take into account the many, many factors that influence a long-run plan like what the governor proposed yesterday.”

Durkin called on House Speaker Michael Madigan, a Chicago Democrat who sets the chamber’s calendar, to bring lawmakers back into session.

“We must return to Springfield immediately and not for just a few days at the end of the month,” Durkin said.

He added that lawmakers do not have to convene at the Capitol, and instead can hold session in Springfield’s downtown convention center or a large auditorium in the city where they can be socially distanced.

In a statement Wednesday, Madigan did not offer any specifics on a potential return.

“While I am eager to see a return to normalcy, we are talking about people’s lives, and any plan for a return to Springfield must have the health and safety of all those involved as a top priority, including the communities the members represent,” he said in part.

Durkin also said he wants the Legislature to work on non-coronavirus issues like ethics reform and property taxes, which “we cannot just do in 48 hours at the end of May that many people have speculated about.”

The Legislature has not been in session since March 5. The House canceled this week’s session days but has yet to make a decision on next week’s days. The regular legislative session ends at the end of May, and the deadline for passing a budget is June 30. Any legislation passed after May 31, however, needs to pass with a three-fifths majority in order to take effect by the July 1 start of next fiscal year.