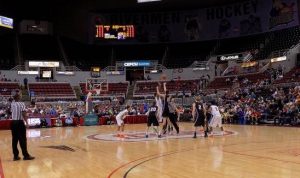 The Illinois High School Association (IHSA) Board of Directors voted Oct. 28 to proceed with the boys and girls basketball seasons as originally planned.

The Illinois High School Association (IHSA) Board of Directors took action on Oct. 28 to allow the boys and girls basketball season to proceed as planned, defying guidelines issued just one day prior by Gov. J.B. Pritzker that put the sport on hold as COVID-19 cases surge across the state.

“The Illinois High School Association Board of Directors made the decision today to continue with the IHSA basketball season as scheduled in 2020-21.

“In August, the Board slated basketball to take place from November to February based on the Illinois Department of Public Health (IDPH) assigning a medium risk level to the sport. The IHSA Sports Medicine Advisory Committee (SMAC) offered additional mitigations, such as masks during play and social distancing on benches, that the SMAC believed would allow basketball to be played safely,” the board said in a press release.

Pritzker and state health officials earlier in the week moved basketball from a moderate risk to a high-risk sport in wake of the state seeing some of its highest hospitalizations from the coronavirus since early June.

The governor and the IDPH announced its new guidelines for youth and adult winter sports on Tuesday, Oct. 27 that was intended to temporarily put a halt to competitive basketball, hockey and wrestling events.

Although participants in those sports were permitted under the guidelines to continue with non-contact training and drills, they will not be allowed to participate in competitive games or matches.

“As with sports in the fall, nothing is ‘cancelled,’ just put on hold until we’re through the thick of this pandemic,” Pritzker said in a news release. “We adapt as we learn. That has been our mantra throughout this pandemic, and as is true in every other facet of life, we know this virus is of most concern when people are indoors with high contact, especially in vigorous situations that bring about heavy breathing — like in wrestling, hockey and basketball.”

The new restrictions were to apply to school-sponsored competitions as well as travel clubs, private leagues and clubs, recreational leagues and centers, and park district sports programs. They do not apply to collegiate or professional sports.

Based on the decision by the IHSA board on Oct. 28, teams will be allowed to being practices on Nov. 16, with games beginning on Nov. 30 within an Illinois COIVD-19 Region — as established by the governor’s office and the Illinois Department of Public Health — or within a conference.

As a part of the mitigation plan, masks will be worn by all players, coaches, and officials during play.  Boys and girls basketball teams will follow team limitations allowing a maximum of 31 games. It will become a local school decision to determine if a school will allow their basketball teams to participate following the guidelines developed by the SMAC.

The IHSA board also voted to move the sport of wrestling from the winter season to the summer season, which will run from April 19 to June 26, 2021.

The board on Oct. 28 approved the IHSA ‘s winter sport guidance for all low risk sports, which includes boys swimming and diving, cheerleading, dance, boys and girls bowling, and girls gymnastics. These sports will be conducted from Nov. 16 to Feb. 13, 2021.

The mitigating guidance for each sport were expected to be posted on the IHSA’s COVID-19 Resource page on Oc. 29. The IHSA Board will review spectator and group gatherings for all winter sports at a future meeting in November.