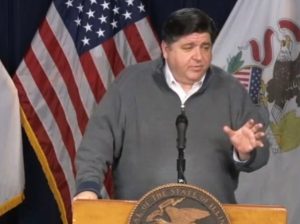 Gov. J.B. Pritzker explains the state’s restriction limiting two people per boat in Illinois during the stay-at-home order as he addresses the media Sunday, May 3 in Chicago. (Credit: blueroomstream.com)

SPRINGFIELD – The Illinois Department of Public Health on Sunday, May 3 reported the state’s highest one-day total of COVID-19 tests with 19,417 completed in the past 24 hours.

For more than a week, the state has met its long-stated goal of 10,000 daily tests, a trend Gov. J.B. Pritzker has said is key to incrementally lifting the stay-at-home order and other social and economic restrictions. Since the outbreak began, 319,313 tests have been completed.

IDPH also reported 2,994 new cases of COVID-19 on Sunday and 63 new deaths, bringing the state’s totals to 61,499 and 2,618, respectively. Ninety-seven of Illinois’ 102 counties have reported cases and 45 have reported deaths. Many of those infected, however, have recovered.

As of midnight Saturday, 4,701 people were in Illinois hospitals with the novel coronavirus. Of those patients, 1,232 were in an intensive care unit, while 759 were on ventilators.

Although the majority of Illinois COVID-19 cases have been reported in Cook County and the collar counties, the virus remains prevalent downstate when looking at cases per capita.

In his daily COVID-19 briefing Sunday in Chicago, Pritzker encouraged local police to help enforce the statewide stay-at-home order amid reports of large parties in Chicago and Peoria.

Pritzker called upon police departments across the state to break up parties and large gatherings.

“We need local government and local police to make sure that people are following these rules,” Pritzker said, adding that “we need the public to comply with the stay-at-home rule because that is how we’ve been defeating coronavirus.”

“We’re not looking to have police crack down on people, arrest people, that is not the intent here,” the governor said. “But it is true that police can break up a party and should.” 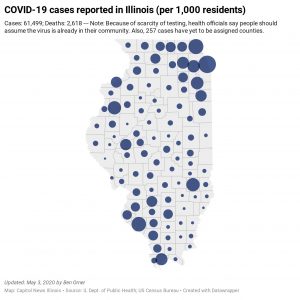 Pritzker also added that “we’ll provide State Police (as) backup whenever they need it.”

The governor acknowledged later in the briefing that enforcement abilities become trickier when groups of people number in the thousands.

“I certainly don’t want to put anybody in danger by suggesting that law enforcement needs to go break up a group of 3,000,” Pritzker said. “On the other hand, it is against the order and law enforcement does have that ability.”

He also warned of the possible danger that such a large gathering could have on public health.

“One person in the middle of that 3,000 can cause many others to get infected and each one of those people has the ability to infect others,” he said.

“People should follow the rules here, and in relatively short order we’ll begin to see, as the economy opens up, things will get better for everyone.”

President Donald Trump has hinted that future coronavirus aid to states could hinge on states’ actions regarding other matters, such as cracking down on sanctuary cities.

“I don’t know whether there will be strings attached,” Pritzker said Sunday morning in an appearance on CBS’s “Face The Nation.” “I hope there aren’t too many because the fact is every state has a problem and it’s different in every state where they need to put the dollars. So putting more strings on it makes it much more difficult for us to move forward to get our economies going.”

Illinois Senate President Don Harmon, a Democrat from Oak Park, asked the state’s federal lawmakers in April to consider giving more than $41 billion in funding to the state as part of the next coronavirus relief package, including $10 billion to stabilize Illinois’ underfunded pension system.

Pritzker said in his Sunday briefing that he is leaving negotiations on future aid up to Illinois’ federal representatives, but he added that “we should try to leave politics out of this and instead look at what the damage is that’s been done to all the states –  those who are represented by Republicans, those who are represented by Democrats –  and try to help them, all of us, fill the hole that’s been made by coronavirus.”

Also on the topic of federal funding, Pritzker on Sunday reminded Illinoisans to fill out the U.S. Census forms that arrived in their mailboxes in April. According to the latest data from the Census Bureau, 61.6 percent of Illinoisans have responded to this year’s census.

“I want to encourage everyone to do their part in ensuring you and all Illinoisans get your fair share of federal funding and are fully represented,” Pritzker said, stressing that federal dollars given to states are often based on population counts.

Illinois’ response rate to the census ranks ninth in the nation and is above the national average of 56.3 percent. The state’s response rate during the previous census in 2010 was 70.5 percent.

Census forms can be filled out online at 2020census.gov.