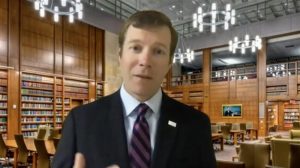 Daniel Suhr, an attorney with the Liberty Justice Center in Chicago, said the first amendment is “at the heart” of the Illinois Republican Party’s lawsuit against Gov. J.B. Pritzker. During a Zoom press conference on June 16, he said the governor’s actions are not based on science, but rather on “political advantage.” (Credit: BlueRoomStream.com)

SPRINGFIELD — The Illinois Republican Party wants to be excluded from the state’s social gathering restrictions, as it alleged in a federal lawsuit that churches and political demonstrations already enjoy such exclusions.

Throughout the year, the party holds a state convention, strategy meetings and candidate rallies — all with more than 10 people present. Under Gov. J.B.Pritzker’s May 29 executive order addressing the continued spread of COVID-19, those in-person gatherings are banned.

According to a court filing, the governor carved out an exception for religious institutions, which can hold socially-distanced services of more than 10 people. It also alleges he “declined to enforce” his order against protesters demanding an end to systemic racism in the wake of George Floyd’s death.

Floyd was a black man who died when a white Minneapolis police officer knelt on his neck for about nine minutes on May 25. Near-daily protests against police brutality have since taken place across the U.S.

“Political parties are for political expression what churches are for religious expression: the corporate manifestation of speech and interaction within a community of shared belief,” the Republican Party argued in its lawsuit, filed June 15.

“Yet, unlike churches, political parties are barred from gathering in groups greater than 10 under the governor’s executive order,” it continued. “And unlike protestors against police brutality, they have not been given an exemption based on his sympathy, recognition, and participation.”

Daniel Suhr, an attorney with the Chicago-based Liberty Justice Center and the party’s representative, said in a press conference Tuesday he is asking a federal judge to agree treating “political party gatherings differently from religious gatherings” violates the U.S. constitution.

And, because “the harm suffered by the Illinois Republican Party is immediate and irreparable” due to how quickly the November election is approaching, Suhr is requesting a judge address this lawsuit quickly. The business of politics, he said, is a “time-bound activity.”

The case applies not just to the Illinois Republican Party, but to all state political parties.

“Gov. Pritzker is ruling Illinois like an unaccountable king where only he gets to decide which violations of his executive order have his blessing,” Tim Schneider, the party chairman, said Tuesday. “The Illinois Republican Party will not sit idly by while the governor of Illinois applies one rule for himself and his political allies and another rule for everyone else. We agree that peaceful protesters have just cause to exercise their first amendment rights, but they aren’t the only ones.”

Suhr added the lawsuit is seeking to uphold “equal treatment” for all political speakers under the First Amendment of the U.S. Constitution. That will make their case more successful than many others challenging aspects of Pritzker’s COVID-19-related restrictions, he said.

“It is not the government’s job under the first amendment to favor one viewpoint over another,” Suhr said Tuesday. “We’re asking for the same fair treatment not to be based on the content of our speech, but rather to say every group that’s engaging in the public square deserves the same treatment from the government.”

The Will County Republican Central Committee, Schaumburg Township Republican Organization and Northwest Side GOP Club are also parties in the lawsuit. The attorney general’s office, which defends the governor against lawsuits, has not responded to the allegations.