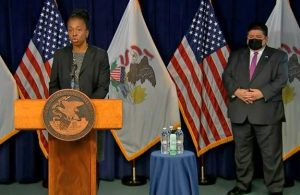 Illinois Department of Public Health Director Dr. Ngozi Ezike and Gov. J.B. Pritzker on Nov. 12 urge Illinois residents to remain home as much as possible during the next three weeks, including over the Thanksgiving Day weekend, to help control the spread of COVID-19. (Blueroomstream.com)

Illinois residents are being urged to stay at home as much as possible for at least the next three weeks as the second wave of COVID-19 outbreaks continues to sweep across the state.

The latest advisory from the Illinois Department of Public Health does not represent a renewal of the stay-at-home order that was in effect this spring, but Gov. J.B. Pritzker warned Thursday, Nov. 12 that if current trends continue, stricter mitigation orders could be in store.

“With many community leaders choosing not to listen to the doctors, we are left with not many tools left in our toolbox to fight this,” Pritzker said during his daily COVID-19 briefing in Chicago. “The numbers don’t lie. If things don’t take a turn in the coming days, we will quickly reach the point when some form of a mandatory stay-at-home order is all that will be left.”

The latest guidelines urge all Illinois residents to stay at home as much as possible, leaving home only for work or school if they are not working or learning remotely, grocery shopping, visiting a doctor or getting a COVID-19 test.

He also said the state is increasing its testing capacity at the most-visited testing sites in the state — Aurora, Arlington Heights and Harwood Heights. A full list of available testing sites statewide can be found at the Illinois Department of Public Health’s website, http://dph.illinois.gov/testing.

Both Chicago’s and the state’s advisories extend through the upcoming Thanksgiving Day weekend, and public health officials strongly urged people to avoid any type of gathering outside of their own households.

“With the rising prevalence of this virus, attending even the smallest gathering that mixes households or traveling to surrounding areas, that increases the risk of further spread of this virus,” IDPH Director Dr. Ngozi Ezike said during the briefing. “Again, our goal is to reduce transmission. It’s always been our goal, but especially as we head into the holidays so that businesses, so that schools, so that our veterans’ homes can be safe.”

Ezike also spoke of recent outbreaks that have occurred at a number of state-run veterans’ homes, including one in LaSalle, where more than 150 cases of COVID-19 and nine virus-related have been confirmed among residents and staff.

The new stay-at-home advisory came as the state recorded a new record for the number of people hospitalized with the disease. As of late Wednesday night (Nov. 11), 5,258 people were reported hospitalized, an increase of more than 200 from the day before. That included 956 people in intensive care units and 438 patients on ventilators.

As the number of infections and hospitalizations have been rising in recent weeks, new unemployment claims continued pouring in to the Illinois Department of Employment Security.

During the week that ended Saturday, Nov. 7, IDES reported, 67,158 workers filed first-time unemployment claims, down roughly 9 percent from the previous week, but still more than six times the number who filed such claims during the same week a year ago.

According to the U.S. Department of Labor, 338,899 Illinois workers were receiving continuing unemployment benefits during the week, down about 1 percent from the previous week.

In addition, another 9,726 people filed initial claims for Pandemic Unemployment Assistance, a federally-funded program for gig workers, independent contractors and others who don’t normally qualify for traditional unemployment insurance.

During his briefing, however, Pritzker noted that the PUA system has been plagued by fraud nationwide, and he blamed federal officials for failing to enact adequate controls to prevent fraud when Congress established the program earlier this year.

Meanwhile, Pritzker also used some of the strongest language yet in talking about local elected officials who have so far refused to enforce the state’s mitigation orders aimed at controlling the spread of the virus.

“To the elected officials who have chosen to disregard public health guidance, those who have stood up at press conferences to question the data and fuel conspiracy theories, those who have taken their absurd crusade to the courts and lost nearly every single time, those who have flat-out told the businesses in their communities to ignore what their local and state public health departments and experts, some of the best in the nation, are telling them, what is it going to take to get you to be part of the solution?” Pritzker said.

“There may be a vaccine on the way in just a few months, but a lot of lives can be saved before that happens,” he added. “And when this is over, there will be an accounting by your constituents of who worked to keep the public safe and who just ignored the science.”