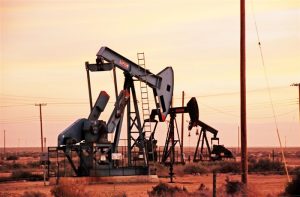 Illinois oil pumps — similar to the one depicted in this stock photo — have been largely stilled in recent weeks as demand has fallen off during the economic slowdown brought on by the COVID-19 pandemic. (Credit: morguefile.com)

SPRINGFIELD – Oil production in Illinois has been on the decline for many years, but a steep drop in demand brought on by the economic slowdown spurred by the COVID-19 pandemic has taken a big bite out of the industry.

“Our production for the first quarter was actually a little bit stronger, quarter-over-quarter, but there’s no doubt that our production will decline in the second quarter,” Seth Whitehead, spokesman for the Illinois Petroleum Resources Board, said during an recent interview. “You know, just the eyeball test looking around, where I live in Fayette County, there are a lot of shut-ins at the moment. And right now, the price of oil is about $12 to $15 below where it needs to be for producers to turn a profit.”

According to the industry website oilmonster.com, Illinois crude oil was trading at $21.25 per barrel on April 3, well below the roughly $35 per barrel most producers need to turn a profit. But as most states have asked their residents to limit nonessential travel, demand for oil in the United States has plummeted, and on Thursday, May 7, Illinois crude was down to $10.50 per barrel.

Although it is a relatively small part of Illinois’ overall economy, oil production remains an important industry in parts of the state, especially southeast Illinois. Whitehead said one reason it is often overlooked is because the industry is concentrated in sparsely-populated counties.

“You know, 15 counties produce 90 percent of the oil in Illinois and 2 percent of the entire population resides in those counties,” he said. “So, it’s very spread out over a very rural area.”

In the early part of the 20th century, according to IPBR, oil production was a major part of the state’s economy and Illinois was the nation’s third leading oil producing state.

Even before the pandemic hit the United States, oil prices had been falling due to overproduction in countries like Saudi Arabia and Russia and a lack of storage capacity in the United States. It remains to be seen how long it will take for prices to recover enough for the oil industry in Illinois to bounce back. But Whitehead said industry officials here remain optimistic.

“We’ll definitely see a short-term production decline…” he said. “But if the pandemic eases and things get back to normal sooner, rather than later, the industry has a better chance of coming out of this looking in pretty good shape. But the longer it goes on, obviously, the tougher it’ll get.”