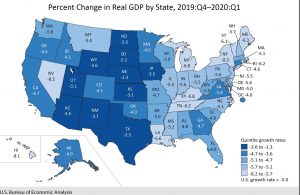 The U.S. Bureau of Economic Analysis map shows the percentage rate change in real GDP per state from the fourth quarter of 2019 to the first quarter of 2020.

SPRINGFIELD – The Illinois economy shrank at an annual rate of 5.4 percent during the first quarter of 2020 compared to the previous quarter, according to federal data released Tuesday, July 7, an indicator of just how severely the COVID-19 pandemic affected commercial activity.

The gross domestic product figures for the January-through-March period represent the total value of goods produced and services provided during the quarter.

University of Illinois economist Fred Giertz said in an interview that virtually all of the decline occurred in the final weeks of March, after Gov. J.B. Pritzker issued a statewide stay-at-home order that forced many businesses, schools and other employers to shut down or scale back operations.

“All the evidence suggests that the first two months of January-February were not impacted very much by the virus issue, but then they have a huge impact and in March even though the formal shutdown didn’t begin until the last week or so of March,” he said.

Nearly all sectors of the economy took significant hits during the quarter led by arts, entertainment and recreation, which took the biggest hit with a 36 percent rate of decline. Accommodations and food service fell at a rate of more than 27 percent.

Other sectors taking big hits included finance and insurance, down 10.6 percent, and transportation and warehousing, which includes airline and rail transportation, which fell at a 9.8 percent rate.

The only bright spot in the report was the agricultural sector — one area of the economy that was not affected by the stay-at-home order —which grew quarter-to-quarter at a rate of 183 percent.

The overall decline in Illinois was greater than the national average of 5 percent but smaller than the average for the Great Lakes region, which was 5.7 percent.

The U.S. Bureau of Economic Analysis, which produces the GDP numbers, is scheduled to issue its first estimate of second-quarter activity — April through June — later this month, but state-level GDP figures won’t be available until October. 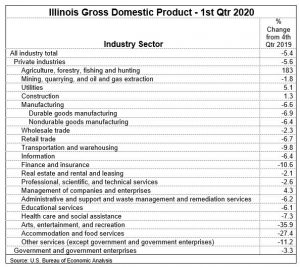 The percentage rate changes in the gross domestic product of various sectors of the Illinois economy during the first quarter of 2020.

However, some early indicators of what’s likely to be in the second-quarter report came out recently from the Commission on Government Reform and Accountability, or CoGFA, the Illinois General Assembly’s fiscal monitoring arm.

That agency reported this week that during the fiscal year that ended June 30, general fund revenues received by the state were $1.1 billion below last year’s revenues, and that virtually all of the dropoff occurred during the April-through-June quarter.

Much of that was due to declines in personal income tax collections, which were down by a net $765 million due to a combination of mass layoffs and delaying the tax filing deadline to July 15. Corporate income taxes and sales taxes were also below last year’s levels.

There were also big declines in revenue from riverboat casinos and the state lottery, although there was nearly a 3 percent increase in liquor taxes.

The report also said June showed signs of improvement as the state gradually began to reopen its economy.

Personal income tax collections during the month were up $173 million, or 9.4 percent, as many people returned to work and began filing their 2019 tax returns. Corporate income and sales taxes remained below June 2019 levels, but overall state tax collections were off by only 0.1 percent.

Giertz said he sees similar trends in his monthly Flash Index, a general measure of economic activity that shows whether the state’s economy is growing or contracting, and by how much.

A Flash Index value greater than 100 indicates a growing economy while a value less than 100 reflects economic contraction.

That index had been over 100 for 96 consecutive months, dating back to March 2012 when Illinois began pulling out of the Great Recession. It fell to 99.8 in March, 94.2 in April and 92.8 in May as effects of the economic lockdown began to be felt. But it ticked up slightly in June to 93.1, indicating the economy was still weak, but improved from May.

“Things are clearly turning around now but that turnaround could be halted almost any time we had another kind of outbreak,” he said. “I suspect, though, that even if we do have a resurgence of the virus, … we’re going to be more open about that and not have a complete shutdown the way we did back in March.”