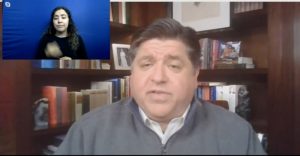 Gov. J.B. Pritzker speaks at a virtual news conference from his home Wednesday, Oct. 7 as he remains in a period of quarantine after a staffer tested positivie for COVID-19. (Blueroomstream.com)

SPRINGFIELD – The Metro East area on the Missouri border could be two days away from seeing stricter mitigations lifted if its COVID-19 test positivity rate stays where it is or decreases.

The rate in Region 4 of the state’s COVID-19 mitigation plan hit 6.3 percent as of Sunday, Oct. 4 the latest day for which data were available. It’s a decrease of four-tenths of a percentage point from the day prior and 1.4 percentage points from four days prior.

It must remain below 6.5 percent for the next two days in order to have mitigations lifted. Added mitigations currently in place in Region 4 since the beginning of September include the closure of indoor dining and drinking at restaurants and bars.

Region 1, which includes northwest Illinois from Winnebago County to the western border, had a positivity rate of 8.6 percent as of Oct. 4, which was one day after bars and restaurants closed to indoor service in the region.

The state reported another 42 virus-related deaths and 2,630 new confirmed cases among 58,820 test results reported in the previous 24 hours. That brought the casualty count to 8,878 among 307,641 confirmed cases as the state surpassed 6 million tests completed.

At the end of Wednesday, there were 1,679 people in Illinois reported hospitalized with COVID-19, including 372 in intensive care unit beds and 165 on ventilators

Asked at a virtual news conference Wednesday, Oct 7 what state assistance may be available to businesses in the region that are hit by COVID-19 mitigations, Gov. J.B. Pritzker pointed to Business Interruption Grants through the Department of Commerce and Economic Opportunity. Applications for the grants are available at the DCEO website, Illinois.gov/dceo.

The money comes through the federal Coronavirus Aid, Relief, and Economic Security, or CARES, Act, and the program makes $220 million available for businesses suffering losses due to the COVID-19 pandemic.

“It’s hundreds of millions of dollars that are available to small businesses that are impacted by the COVID-19 pandemic,” Pritzker said, directing businesses to the DCEO website and noting that some funds have already been released. “There are many more available to people. But the fact is that this pandemic has been terribly hard on bars and restaurants. It’s why we need federal help on bars and restaurants, particularly.”

Pritzker said the state is “looking for the federal government to get more help” for bars and restaurants as well as overall state finances as revenues have plummeted amid the pandemic and associated economic shutdowns. Pritzker said the need is bipartisan, quoting the Republican governor of Florida, Ron DeSantis, who compared that state’s budget to the red wedding in “Game of Thrones.”

On Oct. 6, President Donald Trump said in a tweet he instructed his representatives to “stop negotiating until after the election when, immediately after I win, we will pass a major Stimulus Bill that focuses on hardworking Americans and Small Business.” He later said he would pass a standalone bill to send a second round of stimulus checks to Americans.

“I do believe that, whoever wins the election, that the Congress and the president are going to have to step up to the plate,” Pritzker said. “Although I anticipate that after the election, there will be a real desire to get something done quickly.”

But Pritzker said Wednesday that if the state has to make all of those cuts it will be “tremendously damaging” as he once again said he came into office and inherited a “hollowed out state government” that was crippled by a two-year state budget impasse under his predecessor.

Pritzker warned of a “massive reduction in public safety funding,” or a “massive diminution of funding for our evidence-based funding model” for K-12 education.

He said agency directors are working on budget cuts that will be “the least damaging possible on working families that depend upon our state government.”