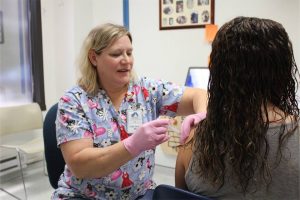 Increasing the number of people who are vaccinated for the flu, Illinois Department of Public Health said, can help reduce the number of flu illnesses, hospitalizations and deaths. (Photo courtesy of McLean Co. Health Dept.)

SPRINGFIELD – State officials on Tuesday, Oct. 6  urged Illinoisans to get their seasonal flu vaccinations as a way to conserve medical resources for COVID-19 patients.

“There is the potential that people could become co-infected with both flu and COVID-19,” Illinois Department of Public Health Director Dr. Ngozi Ezike said in a statement.  “Although a COVID-19 vaccine is still being developed and tested, we do have a vaccine to combat this season’s anticipated flu viruses.  I want to challenge everyone to roll their #SleeveUp and show us you that you’ve received your flu shot and are committed to protect those around you.”

Although the seasonal flu is significantly less lethal than COVID-19, many of the initial symptoms of both illnesses are similar – coughs, fevers, chills and shortness of breath.

That plea came as the number of people hospitalized for COVID-19 in Illinois as of Monday night rose to 1,673, an increase of 42 over the previous day, although that number often fluctuates widely on a daily basis. Of those, 384 patients were in intensive care units, including 159 who were on ventilators.

IDPH also reported Oct. 6 that 1,617 new cases of COVID-19 had been confirmed over the previous 24 hours out of 49,513 tests performed, making for a single-day positivity rate of 3.3 percent. The seven-day rolling average positivity rate held steady at 3.4 percent. There have now been 305,011 cases of the disease in Illinois since the pandemic began.

On a regional basis, Region 1 in northwest Illinois continued to have the highest positivity rate, at 8.5 percent, as of Oct. 3, the most recent date for which data was available. Public health officials imposed additional mitigation efforts in that region effective Saturday, Oct. 3.

In Region 4, which includes the Metro East area across the border from St. Louis, the positivity rate stood at 6.7 percent on Oct. 3.

Enhanced mitigation measures in those regions will only be lifted when they reach an average positivity rate of 6.5 percent for three consecutive days.

Officials also reported an additional 32 confirmed virus-related deaths on Oct. 6, bringing the statewide total to 8,836 since the pandemic first appeared in Illinois. That means about 2.9 percent of those who have tested positive for the virus in Illinois have died, although the number of cases is likely understated as many can have the virus but be asymptomatic, meaning they would not get tested.

According to estimates from the U.S. Centers for Disease Control and Prevention, the death rate from seasonal flu during the 2017-2018 flu season was less than 0.2 percent.

While the COVID-19 pandemic has already killed more than 200,000 Americans, the deadliest flu year since 2010, which occurred in 2017-18, claimed 61,000 lives, according to preliminary estimates from the CDC.