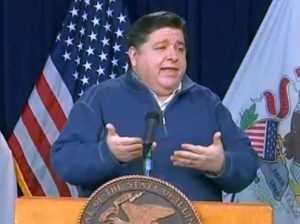 Although part of that number may have been attributable to reporting delays caused by the Thanksgiving holiday weekend, Pritzker said the rising number of new cases and hospitalizations indicated that the state is still in the middle of an infection surge.

“We’ll continue to watch these numbers closely in the coming weeks to have a better picture of our trajectory, but a life lost, reported late, following a holiday, is still a life lost,” Pritzker said.

The governor also noted that the state is expecting 109,000 doses of a vaccine manufactured by the drug company Pfizer between Dec. 13-19, pending Emergency Use Authorization from the U.S. Food and Drug Administration.

He said all 109,000 initial doses would be used on different people, who would have to return for a second dose three to four weeks after the initial dose. He corrected a previous statement he made saying the 109,000 doses would only be able to serve half that amount. Health care workers and long-term care residents will get the vaccine “simultaneously as doses come in,” the governor said.

The governor also noted vaccines would be disbursed based on population throughout the state as more doses are available, although “there’ll be prioritization given up front to counties that had the highest per capita death rates.”

He said governors recently had a meeting with FDA Commissioner Stephen Hahn, who said that vaccine trial materials “will be made available to all of us to review.”

“So I do believe that it will be safe. We’ll be able to review the data to confirm that and I hope that people will therefore get the vaccine, as they are able to see that it’s safe,” Pritzker said.

That news came as the Illinois Department of Public Health announced 9,757 new confirmed and probable cases of the disease over the previous 24 hours out of 85,507 tests performed, making for a single-day case positivity rate of 11.4 percent. The preliminary seven-day rolling average positivity rate ticked up two-tenths of a point, to 10.6 percent.

As of late Tuesday night Dec. 1, there were 5,764 people reported hospitalized with the disease. That number has been trending downward for the last two weeks but remains well above the peaks that occurred in April and May.

As of Tuesday night, 1,190 COVID-19 patients were in intensive care units, and 714 of those patients were on ventilators. About 18.8 percent of ICU beds are available.

Illinois Department of Public Health Director Dr. Ngozi Ezike said there are beds available in all of the state’s 11 mitigation regions, although some hospitals have been nearing or at capacity.

“Eighteen percent is not comforting,” she said. “As we worry about whatever may come from Thanksgiving and we have normal illnesses that occur now, heart attacks, strokes, I mean, all the regular things that would take someone to the hospital. We want to have a bed for everyone who gets sick, and so we don’t like the idea of the (capacity) numbers going down.”

She said it shows the importance of quarantining if exposed to the virus, wearing face coverings and avoiding large gatherings.

Still, she said, “you have a much better chance of surviving COVID-19 in the hospital now, as opposed to wave one.”

The average length of stay in the hospital was nine to 11 days in wave one and is seven to nine days now. She credited “a lot of the learning” about the virus and its effects, noting that “proning,” or lying a patient on their stomach, is a method used more frequently to avoid ventilator use. She also said therapeutics such as the drug remdesivir, antibody treatments and steroids have proven effective.

As of Nov. 29, the most recent day that regional data was available, Region 3, which includes Springfield and several surrounding counties in west-central Illinois, was the only region with a case positivity rate below 12 percent, one of the benchmarks for removing Tier 3 mitigation measures. That region’s positivity rate stood at 10.9 percent.

Region 7, which includes Will and Kankakee counties, had the highest positivity rate, at 16.6 percent, followed by Region 1, in northwest Illinois, at 15 percent.