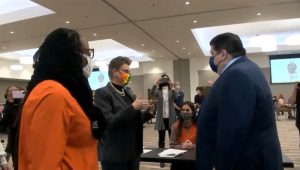 SPRINGFIELD – The state will soon start ramping up the distribution of COVID-19 vaccines as part of its effort to further limit the spread of the disease.

In addition to receiving increased shipments of vaccine from the federal government, the Illinois Department of Public Health announced that it plans to redirect 97,000 excess doses of vaccine from the federal Pharmacy Partnership program, which is in charge of administering vaccines to residents and staff at nursing homes, to make them available to people eligible under Phase 1B of the vaccination program.

IDPH also said it will send out at least eight teams of nurses and volunteers to administer vaccines in assisted living centers, intermediate care facilities for people with developmental disabilities, and group homes.

Those efforts were announced one day after Illinois set a single-day record of 65,200 doses of vaccine administered, bringing the statewide total so far to nearly 1.1 million.

“In fact, Illinois is already running ahead of the Biden plan to reach 100 million vaccinations in 100 days,” Gov. J.B. Pritzker said during a media briefing Wednesday, Feb. 3. “Last week, we administered more than 110 percent of our fair share to reach that goal and that does not include the record day (Tuesday).”

Pritzker spoke at a news conference in Champaign after touring a vaccination center that has been set up at the I Hotel and Conference Center in that city.

That site is one of hundreds of vaccination sites in Illinois being operated by local public health departments and retail pharmacies.

Pritzker also noted that on Tuesday, Feb. 2 the Biden administration announced that it will launch a pilot program to distribute vaccines directly to about 6,500 retail pharmacies around the country. Those shipments will be in addition to those going directly to states and to Walgreens and CVS, the two pharmacy chains involved in the federal partnership to administer vaccines in nursing homes.

“That means 39,000 more doses available each week to Illinoisans and that number will grow within that program,” Pritzker said.

Illinois is currently operating in Phase 1B of the vaccination plan, which includes people over age 65 as well as frontline essential workers outside the health care setting. State officials estimate that about 3.1 million Illinois residents fall into that category.

That group also grew by 177 people on Wednesday after the Pritzker administration announced that state lawmakers can now be included in the Phase 1B group.

That decision drew sharp criticism from Republicans in the General Assembly who have also criticized Pritzker for including prison inmates in the 1B group.

“I don’t agree with it,” House Minority Leader Jim Durkin of Western Springs said during an unrelated news conference Wednesday, Feb. 3. “We need to wait our turn, and if we have members of the General Assembly who have preexisting conditions, they will have an opportunity to go before most of the public. But we should not leapfrog over anyone in this crisis.”

Pritzker, however, defended the decision, saying it came at the request of some lawmakers after a number of them and their staffs contracted the virus during the recent lame duck session in January.

News of the stepped-up vaccination efforts came as the overall infection rate in Illinois continued to decline.

IDPH reported Wednesday that 3,314 new confirmed and probable cases of the disease had been reported over the previous 24 hours out of 96,894 tests performed. That brought the state’s seven-day rolling average case positivity rate down to 3.5 percent, its lowest point since Oct. 7.

Also on Tuesday, IDPH announced that Region 8, which includes Kane and DuPage counties, and Region 9, which includes Lake and McHenry counties, were upgraded to Phase 4 mitigation measures, which allow limited indoor dining and drinking as well as youth and recreational sports activities and the opening of theaters, cinemas and performing arts centers.

That left only Region 4, the Metro East area outside of St. Louis, as the only region not yet in Phase 4. That region remained under the stricter Tier 2 mitigations as of Wednesday, but IDPH said it is on track to enter Phase 4 as early as Thursday.

IDPH also reported an additional 69 virus-related deaths over the previous 24 hours, bringing the statewide total since the pandemic began to 19,375.

As of late Tuesday, 2,469 people in Illinois were reported hospitalized with the disease, including 520 in intensive care units and 270 COVID-19 patients on ventilators.