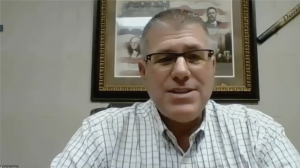 State Rep. Darren Bailey, R-Xenia, tells reporters during a video news conference Friday that he agrees with Gov. J.B. Pritzker that COVID-19 is a public health crisis. But, he added, the governor overstepped his statutory authority by continuing to issue executive orders after April 8, when he alleges the state of emergency expired. (BlueRoomStream.com)

SPRINGFIELD — Gov. J.B. Pritzker’s state of emergency should have expired April 8, an Illinois lawmaker says in a lawsuit, rendering improper his subsequent actions related to the novel coronavirus pandemic.

Republican Rep. Darren Bailey, of Xenia, said during a video news conference Friday he does not dispute COVID-19 is a public health crisis. But he says the governor overstepped authority granted to him by the Illinois Emergency Management Act.

According to his lawsuit, filed Thursday, the act grants a governor emergency powers for only 30 days to ensure “a quick response to a disaster.” During that time, the Legislature has “ample time to convene and address whether any laws need to be codified to further protect the health, safety and welfare” of residents.

Pritzker established a state of emergency on March 9 for “a period not to exceed 30 days,” according to statute. His stay-at-home order was instituted March 20 to slow the spread of COVID-19.

On April 1, the governor announced the novel coronavirus pandemic was a “continuing public health emergency,” and signed an order extending the disaster proclamation.

Bailey’s attorney, Thomas Devore, said Friday that Illinois law does not allow for that action. He is asking a state court to agree that Pritzker’s emergency powers should have lapsed April 8, and to deem all subsequent proclamations and orders invalid.

“Pritzker seemingly believes he can issue continuing proclamations recognizing the same COVID-19 pandemic as a ‘continuing disaster’ every 30 days whereby he can continually invoke the emergency powers of the Illinois Emergency Management Act into perpetuity,” DeVore wrote in a court filing.

“If the Legislature intended to delegate the Office of the Governor the emergency powers for the complete duration of a continuing disaster they would have written as much into the (act),” he added.

The lawsuit applies to only Bailey — meaning it seeks to release the representative from Illinois’ stay-at-home restriction — but any judicial action is likely to apply to all state residents.

Pritzker, in response to a reporter’s question about the lawsuit on Friday, said COVID-19 qualifies as an emergency and pointed out the federal government’s disaster proclamation is still active.

“Frankly, I think that a lawsuit about whether or not this is an emergency is a political maneuver at a time when we probably shouldn’t be dealing with politics but rather simply addressing the emergency that, no matter what political party you belong to … you are subject to,” he said.

A spokesperson for the attorney general’s office, which is representing Pritzker in court, said it is “reviewing the lawsuit.”

Bailey said that while the current political climate might suggest his lawsuit was politically motivated, he said that is not the case.

“The people that know me in the 109th district … know something different,” he said. “They know I’m passionate about this. They know that I’m in this for my family, I’m in this to restore Illinois,” Bailey said. “… I know that’s a good political stump speech, but you’re just going to have to get to know me a little bit better to realize I don’t play games. I grab a hold of opportunity when opportunity comes and that’s what I’m doing here.”

Bailey and DeVore are also asking the court to urge lawmakers to address this. There is no concession in law allowing for the General Assembly to meet remotely or by a video conference, for example, so the 177 members would need to convene in person.

Pritzker on Friday said legislators are considered essential under his order, so they are permitted to return to Springfield in consultation with the Illinois Department of Public Health. How and when that happens is up to Senate and House leaders.

There is a hearing scheduled for 1:30 p.m. Monday in Clay County court. DeVore said the speed with which this case progresses is dependent on what tactic the attorney general’s office takes.

Bailey added he is paying for the lawsuit personally, not with campaign funds.