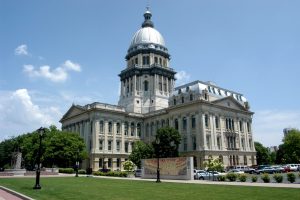 Top leaders of the Illinois House and Senate say there is still no timetable for calling lawmakers back into session. (Capitol News Illinois photo by Jerry Nowicki)

SPRINGFIELD – Top leaders of the Illinois House and Senate say there is still no timetable for calling lawmakers back into session, but they have launched a process for narrowing down the topics they’ll need to address whenever they do return.

In recent weeks, both the House and Senate have formed what they are calling “working groups” that are focusing primarily on how to resume state services and reboot the state’s economy once the COVID-19 pandemic subsides.

The House has organized 14 such working groups, focusing on policy areas such as access to health care, economic recovery, child welfare, food accessibility, education and mental health and addiction.

In the Senate, there are 17 working groups focusing on many of the same topics as well as the state budget, executive orders, gaming, regulatory relief and unemployment insurance.

Officials have been careful, though, to stress that the working groups are not legislative committees and that they are not authorized to draft legislation, hear testimony or take votes.

“These are far more informal,” Rep. Michael Zalewski, a Riverside Democrat and co-chair of the House economic recovery working group, said this week. “I think they’re simply ways for us to congregate and hear each other out and compare notes and ideas about what we’re going to face in the near future, when we do return to normal regular order.”

The difference between “working groups” and legislative committees is important because Article IV, Section 5 of the Illinois Constitution requires all meetings of the General Assembly, as well as legislative committees and commissions to be open to the public, unless two-thirds of the chamber votes to close them.

Scott Szala, who teaches about the state Constitution at the University of Illinois College of Law, said the drafters probably never anticipated a situation like the one the General Assembly now faces, and there have been no Supreme Court cases since the Constitution was ratified in 1970 to clarify how far that provision extends.

In fact, he said, the only case dealing with that constitutional provision came in 2001 when the Supreme Court rejected a lawsuit filed by the Illinois Press Association and several member newspapers against then-Gov. George Ryan over media access to meetings of legislative and executive ethics commissions. The court rejected that suit on the grounds that the governor was not a proper defendant in the case.

Zalewski agreed that the drafters of the state Constitution probably didn’t envision such a scenario.

“I think that it’s incumbent upon us to at least somewhat organize ourselves into policy silos to be ready for whatever’s coming next,” he said.

Rep. Dan Brady, R-Bloomington, said he accepts the fact that the working groups have only a limited charge.

“I would have to tell you that I think if we have to do any votes or anything substantive like that, we’re going to have to be back to the Capitol, I think, in order to effectively make sure that what we’re doing is seen by the electorate and that people have the opportunity to be part of it,” he said.

Senate Minority Leader Bill Brady, also a Bloomington Republican but no relation to Dan Brady, said the working groups are needed so lawmakers can focus on the tasks that will face them when they reconvene.

“These are challenging and difficult times. (Senate) President (Don) Harmon and I talked about what we can do to work on making sure that the legislators were educated and we didn’t lose the time that we have to do that,” he said.

Zalewski said one of the most pressing tasks – one that he said state government has little control over – will be getting the state’s economy up and running again, which he said could take a very long time.

“I think it’s going to be slower than many people would desire,” he said. “I think that we’re going to need a lot of economic stimulus from the federal government because they have the ability to inject immediate capital into the economy. Our ability to inject capital is far less available. What we’re able to do is promote specific policy proposals that, down the line, could produce economic activity.”

Republicans have recently called for a strategic reopening of sectors of the economy in the coming days, and Gov. J.B. Pritzker has hinted at changes to his stay-at-home order, which is scheduled to end April 30.

Sen. Brady said in a phone call he would like to see the data Pritzker is relying upon so it could inform a regionalized approach to opening some businesses. He specifically pointed to hospitals that indicate they can reopen for certain procedures while still handling COVID-19 cases.

He said data may indicate some areas are ready for openings sooner than others.

“We need to plan for that,” he said. “We need to tell the people of Illinois what the benchmarks are.”

A group of House Republicans on Wednesday called on the governor to allow hospitals to resume performing cancer screenings and other kinds of elective procedures, to allow many retail establishments to reopen provided they follow safety guidelines, and to reopen state parks.

Rep. Ryan Spain, R-Peoria, said during a video news conference that the stay-at-home order that took effect March 21 has been successful and has probably saved many lives, but he said the people of Illinois also need to get back to work.

“We’ve slowed the spread of COVID-19. We’ve bent the curve, allowing our health care workers to be more safe and better able to do their jobs,” he said. “This has been important work. We’ve all made sacrifices together because this is going to be a long process as we go forward. But now we are looking at how we go forward and how we think about economic recovery in the state of Illinois.”

During his daily COVID-19 briefing in Chicago, however, Pritzker said the state still needs more capacity to test for the disease, to trace all of the people who have come into contact with infected patients, and build up an adequate supply of personal protective equipment, or PPE, before it can reopen the economy.

“While we’re working very hard on PPE and testing and spinning up a contact tracing effort that will be very large at the end, those are three things we have to work on and we’re not there yet,” he said.