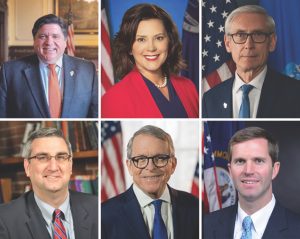 SPRINGFIELD – Gov. J.B. Pritzker announced Thursday, April 16 that he and five other Midwestern governors have agreed to coordinate with one another as they make plans for reopening their economies after the COVID-19 pandemic subsides.

“Our number one priority when analyzing when best to reopen our economy is the health and safety of our citizens. We will make decisions based on facts, science, and recommendations from experts in health care, business, labor, and education,” the governors said in a joint statement.

The governors said they will consider at least four factors in determining when best to reopen their economies: sustained control of the rate of new infections and hospitalizations; enhanced ability to test for the disease and trace the routes of its spread; sufficient health care capacity to handle a resurgence; and best practices for social distancing in the workplace.

The governors stressed that not all parts of the economy, and not all regions, will reopen at the same time.

“Phasing in sectors of our economy will be most effective when we work together as a region,” the governors said. “This doesn’t mean our economy will reopen all at once, or that every state will take the same steps at the same time. But close coordination will ensure we get this right. Over time, people will go back to work, restaurants will reopen, and things will go back to normal. We look forward to working together as one region to tackle this challenge together.”

The six-state Midwest agreement is the third such regional compact to be announced so far. Earlier, California, Oregon and Washington said they would coordinate their reopening. Also, New York announced earlier this week that it will coordinate with six other northeastern states. 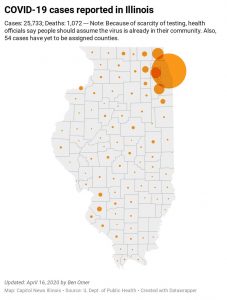 During his daily media briefing in Chicago, Pritzker gave little by way of response to questions about why the states of Missouri and Iowa were not included in the group.

“We would love to have as many states as want to join as a part of it. Iowa chose not to be part of this,” he said. “I know they don’t have a stay-at-home rule, you know, yet in place. They’ve made a lot of different decisions than we have.”

The Midwest compact was announced on the same day the U.S. Department of Labor reported another 5.25 million Americans filed first-time unemployment claims during the week that ended April 4, including 141,049 in Illinois.

It also came on the same day the Illinois Department of Public Health announced 1,140 new confirmed cases of COVID-19 and 125 virus-related deaths over the previous 24 hours, by far the highest single-day death total since Pritzker’s disaster declaration went into effect March 9.

Testing and PPE purchases ramp up

Also Thursday, Pritzker announced that the state has significantly increased its capacity to perform COVID-19 screening tests and its ability to supply hospitals and health care centers with personal protective equipment, or PPE.

One of the biggest obstacles to expanding the state’s testing capacity, the governor’s office said in a news release, has been the lack of testing equipment, and specifically the swabs and “viral transport media,” or VTM.

Pritzker announced Thursday that it had secured commitments from state universities and outside vendors to supply the state with “an abundance” of those materials to stock state laboratories and other labs throughout the state.

In addition, the administration announced that the equipment manufacturer Thermo Fisher Scientific has addressed problems previously identified with its COVID-19 testing machines, and the five machines it provided to the state are now operational, and Thermo Fisher has prioritized Illinois as a customer of its equipment and testing procedures.

“Those five machines that we had concerns about are now up and running with reliable results, so reliable that as we ramp up over the next week, we’re estimating additional capacity of thousands more tests per day at our state labs alone,” Pritzker said.

Illinois’ recommended testing criteria will now include “all those who are experiencing COVID-like symptoms,” according to the governor’s office. The new guidance will apply to state-run drive-thru testing centers and will be offered to medical providers across Illinois, although those with mild symptoms are still encouraged to call a medical provider before seeking a COVID-19 test.

Finally, Pritzker said the state has also managed to purchase enough personal protective equipment to keep hospitals and first responders in supply for at least the next few weeks.

Pritzker said the administration has 28 million N95 and KN95 masks, which protect workers from inhaling the virus, along with nearly 30 million surgical and disposable masks, gowns and coveralls, 27 million gloves and 7.6 million face shields.