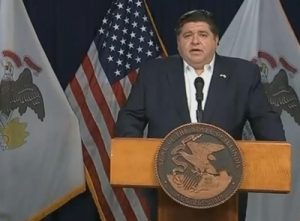 Gov. J.B. Pritzker speaks at his daily COVID-19 briefing in Chicago on Sunday, April 19. He praised the state’s National Guard as he welcomed one of its units home and gave an update on personal protective equipment at the briefing. (Credit: BlueRoomStream)

SPRINGFIELD – Gov. J.B. Pritzker praised the state’s National Guard as he welcomed one of its units home and gave an update on personal protective equipment Sunday at his daily COVID-19 briefing in Chicago.

Pritzker welcomed home the 1st battalion of the 178th Infantry Regiment of the Illinois National Guard, which had been serving in Afghanistan. He also credited the Guard for setting up drive-thru testing sites, building an alternate care facility at the McCormick Place convention center in Chicago and providing surge support at various facilities.

He also said the Guard will handle transportation logistics for another airlift of personal protective equipment, or PPE, to the state Monday.

“These millions of masks and gloves and other PPE will be taken to our state warehouse where inventory and performance quality checks are done,” Pritzker said.

He also criticized the process which has required states to procure their own PPE, and once again said President Donald Trump should have used the Defense Production Act to take the lead in the process.

“If it strikes you as atypical that in the midst of a national emergency, a state is directly airlifting emergency response materials from another country, well, you’d be right,” Pritzker said. “But that’s the landscape that we’re operating in, competing with other states, other countries and even our own federal government for supplies.”

The state announced 1,197 new cases of COVID-19 Sunday, including 31 new deaths – a major decrease from the record 125 reported on both Saturday and Thursday this week and the lowest amount reported since April 6. There are now 30,357 cases and 1,290 COVID-19-related deaths in Illinois. The virus has been confirmed in 93 of 102 counties.

Illinois Department of Public Health Director Dr. Ngozi Ezike said the state’s stay-at-home order has helped slow the rate of growth “tremendously,” but “of course it’s not enough to have completely made sure that it died out.”

Pritzker also said just because a state has machines with certain “testing capacity” does not mean they can conduct that amount of tests, because often they are without swabs and other equipment needed to complete tests. He said when the federal government reports on testing capacity it does not accurately represent the number of tests a state can conduct.

“You need a lot of other things in order to actually have a test result,” he said. “You need a swab to take the specimen, you need the viral transport medium to put the specimen in so that it can be transported safely. You need the RNA extractor so that the process can run properly and you need the machine, and oh by the way, you need lab technicians and a lot of them because we’re doing a lot more testing than normally gets done.”

There were 5,914 more test results reported Sunday, a step back from the more than 7,000 tests that had been reported each of the last two days. A total of 143,318 have been tested in Illinois, and Pritzker has said the state needs to test at least 10,000 a day to adequately track and collect data on the virus.

Pritzker said the number of tests is “fluctuating” each day, because it includes state labs, hospitals that are conducting testing and private labs, each which report on different timelines.

“It’s going to be different each day, because you get different reports each day,” he said. “I’ll tell you today, we got no report from one of the largest commercial laboratories in the country. And so that’s a number of tests that were obviously done and completed, but never reported to us because they didn’t report it to anyone in the country.”

Pritzker was also asked about the safety of those still going to work and whether wellness checks each day were adequate safety protocols.

“The answer is no, it’s not enough, and what we really need is rapid testing in all of those settings… congregate settings, but also everywhere else,” he said, noting that the scientific understanding of the virus only recently evolved regarding asymptomatic transmission.

That question came as the state began reporting data on the IDPH website regarding the number of COVID-19 deaths and confirmed cases at state nursing homes. A Chicago Tribune review of the data showed that at least 189 long-term care facilities in 22 counties have confirmed cases of the virus, with more than 1,800 cases tied to nursing homes. Those include 286 deaths.

“We knew even before we got into having the large numbers of long term care facilities with cases that that would be one of our hardest areas,” Ezike said. “You know the congregate settings, by definition, it’s hard to be able to do the physical or social distancing and be able to separate and isolate people.”

She said the state has restrictions on visitors at such homes as well as increased cleaning, PPE requirements and increased monitoring of patients.

“But even with those practices. We’ve obviously seen cases,” she said, adding that the state is beginning the process of sending testing supplies to neighborhoods or areas with high COVID-19 activity.

“And so, if it’s a hot zone, if you will, we’re worried about the facility in the midst of that and so we’re sending materials for testing to those locations so that we can do aggressive testing of the staff and people who would be in that facility,” she said.

Pritzker also once again urged everyone to wear a mask in public and said he would consider making the advice an official order in the future.

“April 30 is when our stay-at-home order expires. And so we’re looking at how we might make adjustments. And so, obviously between now and then, we’ll be making some decisions about that and putting that forward,” he said.

He also said shoppers should wipe down items they buy at stores and throw away bags promptly.