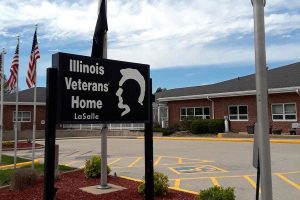 A total of 105 residents and 100 staff at LaSalle Veterans Home have tested positive for COVID-19 since the outbreak began. Currently, there are 40 residents and 24 staff who are actively positive for the virus. (Photo courtesy of State Sen. Dan Harmon)

SPRINGFIELD — Members of the state Senate Veterans Affairs Committee had pointed questions for officials with the Illinois Department of Veterans Affairs about the agency’s response to an outbreak at the LaSalle Veterans’ Home that has resulted in at least 27 resident deaths from COVID-19-related complications.

The committee called for the hearing last week, following reports of the growing outbreak since the beginning of November.

The LaSalle home outbreak was first discovered by staff when a resident was sent to the hospital for a severe urinary tract infection on Nov. 1 and was found to be COVID-19 positive, according to Dr. Avery Hart, a U.S. Air Force veteran and physician with the Illinois Department of Public Health.

Hart, who testified during the committee, serves as a medical consultant for the department’s COVID-19 clinical response in congregate living settings.

He said test results returned from the lab on Nov. 3 showed that 22 residents and seven staff identified positive. By Nov. 8, 59 residents and 64 staff tested positive for COVID-19.

Sen. Paul Schimpf’s line of questioning focused on the delay between the outbreak at the facility and the request for an IDPH site visit.

He questioned IDVA Director Linda Chapa LaVia, a former member of the Illinois House of Representatives.

“This is what’s frustrating to me, Director (Chapa LaVia). Your legislative liaison sent an email to the senators on this committee and I appreciate the update. But that email talked about the sense of urgency in the sense of trying to do everything that could be done to ensure the safety. But the actions don’t seem to match the rhetoric,” Schimpf, R-Waterloo, said.

“So, the two questions are, when was Gov. (JB) Pritzker notified about this, did he give any guidance and then why again was it not until Nov. 12 that we had IDPH personnel on site?”

Chapa LaVia said she personally did not speak to Pritzker but he was aware of the outbreak.

Chapa LaVia, who served as a First Lieutenant in the Illinois Army National Guard, also pushed back against the charge that the IDVA officials should have moved more quickly to respond to the LaSalle outbreak.

“But I feel that our staff moved as quickly as they could,” she said. “I feel that we’ve tried to move as swiftly as possible….And we have always been in contact with IDPH with each and every step we take, to make sure we’re doing the proper protocol and procedures.” 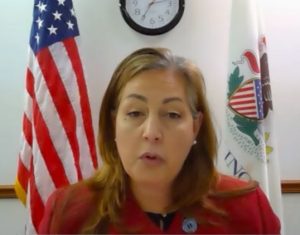 The reports documented areas for immediate change, including replacing all non-alcohol based hand sanitizers with alcohol-based sanitizers, performing COVID-19 tests for residents and staff twice weekly, rather than once per week, and requiring staff to follow strict personal protective equipment guidelines.

For instance, the report mentions staff were observed in full PPE walking through an administrative area of the home, as well as three staff members being seen in the facility’s kitchen with masks around their chins, eating, and all less than six feet from each other. The report also mentions staff seen wearing gloves to touch patients and multiple surfaces without changing or performing hand hygiene.

“I’m just concerned that for those veterans that are receiving treatment, some of these practices could worsen their condition, which can be quick changes. What are the things that are being done at this facility to ensure that, on the treatment side, they are getting the proper care with the proper protocol?” Ellman asked.

Hart acknowledged that breaks in protocol were observed during the site visit, and said staff within the facility now are tasked with monitoring and enforcing proper PPE guidance.

Employees failing to properly wear PPE could increase the likelihood of virus transmission between employees, but Hart said it can be difficult to pin down the precise origin when the virus is rampant in the community.

“Let’s say two staff members came down with COVID within a certain period of time. You don’t know if one of them is married to a frontline worker, or another one was in a bar downtown or they were just shopping for their groceries and had the bad luck to encounter the virus,” he said.

IDVA Chief of Staff Anthony Kolbeck said five employees at LaSalle continued to work at the home after being notified that they tested positive.

“In general, it was notification late at night. They were the only people there for that position. If they went home, it would create another issue and they volunteered to stay,” Kolbeck said during the hearing.

He said the five employees were working with patients who already tested positive.

The Senate hearing kicked off shortly after the IDVA announced the Acting Inspector General from the Illinois Department of Human Services will conduct an independent investigation into the outbreak at the LaSalle home and IDVA “will immediately address any findings from that investigation,” according to an agency press release.

Chapa LaVia said the investigation could take between four to six months.

“We will make sure that we reconvene, so we can go over those findings, but we want to make sure that we get to the bottom of this. I thought it very important to go above and beyond,” she said, noting the review would be independent and conducted from outside the department.

Chapa LaVia pointed to the increasing spread of the virus in LaSalle County as an explanation for the outbreak at the veterans’ home.

Beginning Oct. 23, LaSalle County’s COVID seven-day average positivity rate jumped from 7.2 percent to 13.1 percent in just one week, according to the IDPH website. By Nov. 6, the county’s productivity rate reached 18.5 percent and, by the following week, it rose to 20.5 percent. As of Nov. 21, it was 16.2 percent.

“The people who care for our heroes in the homes live within the communities they serve,” she said. “But when community spread of this virus is high, staff can fall prey to infection, no matter how conscientious they have been about following protocols.”

Schimpf said the other veterans’ homes located in similarly affected communities have not seen cases and deaths spike, as they have in the LaSalle facility.

“The reason I think that’s relevant is you have COVID running rampant through places besides LaSalle, but yet the Veterans Home in a Manteo and Quincy have been able to largely avoid the type of tragedy that we’ve seen in LaSalle,” Schimpf said.

The Quincy home has reported one COVID-19 related resident death, and it currently has 13 positive residents and 18 positive staff.

The Manteo home has reported 17 COVID-19 related resident deaths, and it currently has zero positive residents and eight positive staff.