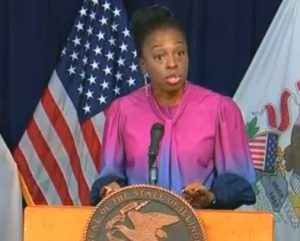 Illinois Department of Public Health Director Dr. Ngozi Ezike talks about the need for state residents to continue to wear face masks and to practice other safety measures while they await a COVID-19 vaccine to be distributed. Ezike spoke during a news conference Monday, Nov. 30 in Chicago. ( blueroomstream.com)

SPRINGFIELD – Despite some slight improvement in key public health metrics over the past week, Gov. J.B. Pritzker said he has no immediate plans to roll back COVID-19 mitigation efforts as he warned of a possible post-Thanksgiving surge.

Speaking during his daily COVID-19 briefing Monday, Nov. 30 in Chicago, Pritzker quoted Dr. Anthony Fauci, director of the National Institute of Allergy and Infectious Diseases, who warned over the weekend of “a surge within a surge” due to the large volume of holiday travel over the Thanksgiving Day weekend.

“He is not alone in that assessment,” Pritzker said.

“The dip in Illinois’ cases over the last few days comes as we are seeing near-record high numbers of hospitalizations, meaning that our ability to handle any new surge in COVID patients is still limited,” he added.

According to data from the Illinois Department of Public Health, the daily average number of patients hospitalized for COVID-19 in the state actually fell Nov. 24-29, to 5,944. That was a decline of 114, or roughly 1.9 percent, from the previous week’s average.

IDPH reported Monday, Nov. 30 that there had been 40,837 new confirmed and probable cases of the disease since Wednesday afternoon and 446 additional deaths, bringing the statewide totals since the pandemic began to 726,304 cases and 12,278 fatalities.

Although the rate of hospitalizations was down slightly for the week, there were slight upticks in the use of intensive care unit beds and ventilators.

The number of patients in ICU beds averaged 1,209 per day over the Thanksgiving break, an increase of 30 over the prior week. But that was a slower rate of increase than what the state had seen over the previous five weeks.

Ventilator use averaged 142 patients each day during that same period, an increase of 13 over the prior week.

IDPH also reported slight improvement in the number of cases being detected as a percentage of all tests that were conducted. The preliminary seven-day rolling average positivity rate for the week of Nov. 23-29 stood at 10.2 percent, down from 10.9 percent a week earlier.

“But we had seen even before this last week that there was a suggestive trend of things starting to move in the right direction, and we’re just all hoping and praying that does not get reversed with the activities from Thanksgiving,” IDPH Director Dr. Ngozi Ezike said.

Still, Pritzker said, it could take several days, or even weeks, before the state sees what impact holiday travel and gathering will have on its infection rate, and he said he has no plan to scale back the Tier 3 mitigations in place for at least the next three weeks.

“I say this as we come off of a Thanksgiving holiday when many people may have dropped their guard and gathered with people from outside of their own households,” he said. “The hope now is that we can fend off the surge in the next few weeks to get to a healthier holiday time in the latter half of December. We’ll be watching the data closely to monitor for a Thanksgiving related surge in our case count, our positivity rate, our hospitalizations, and ICU admissions.”

Pritzker said he had spoken by phone just before the news conference began with members of the White House Coronavirus Task Force, including Dr. Fauci, about the timing of a rollout of vaccines that are being developed. That call came on the same day the biotechnology company Moderna Inc. applied for emergency use authorization of its vaccine.

Pritzker noted that the U.S. Food and Drug Administration is expected to decide Dec. 10 on another request for emergency use authorization by the drug company Pfizer. But even if the FDA grants that request, he said, it could take several days before the vaccine is available in Illinois.

The governor added that the state still does not know how many doses of the vaccine will be made available, but he said the first priority will be to vaccinate health care workers and other first responders who work directly with COVID-19 patients.