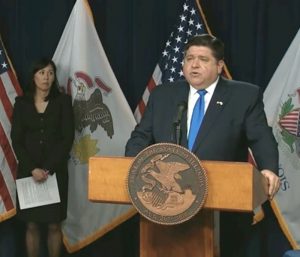 Gov. J.B. Pritzker on Thursday announced tens of millions of federal and private dollars, from a disaster declaration and a philanthropic fund, to help fight the COVID-19 pandemic in Illinois. (Credit: BlueRoomStream)

SPRINGFIELD – New federal and charitable funding will soon be available to Illinoisans affected by the COVID-19 pandemic as the state on Thursday, March 26 saw its largest one-day spike of new cases and deaths during the pandemic.

In his 18th consecutive daily briefing on the pandemic, Gov. J.B. Pritzker said Thursday he is also seeking a disaster declaration for all 102 counties from the Federal Emergency Management Agency.

A record-shattering 3.3 million Americans, including 114,663 Illinoisans, applied for unemployment benefits in the week ending March 21.

More federal assistance is likely on its way in the coming days after the U.S. Senate on Wednesday night, March 25 voted unanimously to pass a $2.2 trillion stimulus package, 96-0.

Expected to be passed by the House of Representatives as early as Friday and signed into law by the president, this third wave of COVID-19 relief will help people, hospitals and restaurants stay afloat during the pandemic, said U.S. Sen. Dick Durbin, and Illinois Democrat.

“But to think that every senator, Democrat (and) Republican, came together tells you, I believe, that we not only understand the gravity of this challenge, but the importance that we move quickly and put politics aside when it comes to the well-being of the people we represent and the future of our nation,” Durbin said at Thursday’s briefing.

Hospitals and health care providers nationwide will also receive more than $120 billion total. Restaurants with fewer than 500 employees would be able to get loans through the U.S. Small Business Administration, and, under certain circumstances, would not have to pay the loans back if they spend the money on things like payroll or rent.

Although the stimulus package represents about half the spending of the 2019 federal budget, some public officials, like New York Democratic Gov. Andrew Cuomo, have criticized the stimulus for not doing enough. Pritzker said people should “at least recognize a win.”

“Does more need to be done? Yes,” he said, adding that right now, “my biggest concern is not the expenditure that we’re making to save lives, it’s are we saving lives? Are we actually bending the curve?”

Pritzker announced Thursday an independent fund, operated by the United Way of Illinois and the Alliance of Illinois Community Foundations, to support nonprofit organizations serving people most impacted by the pandemic.

“These funds will help many people across our state who are really, really hurting now,” she said.

In the coming weeks, the fund’s steering committee, comprised of philanthropic leaders across the state, will disburse money to charitable organizations that serve communities in need. Money will go toward things like emergency food and basic supplies, housing and shelter, primary health care services, financial services and support for children.

“No amount is too small,” Gov. Pritzker said.

The billionaire governor said he and his wife contributed $2 million of their own money to the fund, while Gov. Pritzker’s foundation gave another $2 million.

Illinois on Thursday saw its largest single-day increase in COVID-19 cases, at 673, and deaths, at seven. Cases have been reported in 37 counties, but health officials say everyone should assume the virus is in circulation where they live.

The newly deceased are a man in his 50s, two men and two women in their 60s, a man in his 70s and a woman in her 90s. The Illinois Department of Public Health said five of the victims were from Cook County, one from McHenry County and one from Will County. Nearly nine in 10 of the state’s dead have been 60 or older.

Illinois has now recorded 2,538 cases and 26 deaths directly related to COVID-19. More than 16,000 people have been tested. Thursday was the state’s 19th consecutive day of an increase in reported cases and its eight straight day with new deaths as Illinois continues to climb the curve to a peak in both categories.

Though Illinois is “in a period of exponential growth” in cases, IDPH Director Dr. Ngozi Ezike said prevention measures like social distancing, school closures and the stay-at-home order have allowed the state to be “slightly under” initial forecasts and predictions.

“Throwing all caution to the wind in the midst of a deadly pandemic is not acceptable. You are putting not just yourself but your family and your friends in danger,” Pritzker said. “We all want to maintain our freedoms, even in the context of our stay-at-home order. But I am begging you, please, if you don’t have to be out, stay inside.”

Chicago officials on Thursday closed the city’s scenic lakefront and outdoor trails because people earlier in the week were gathering outside in the warm weather.

“We are tempted to get together and socialize, but we need to look forward and look for the big picture,” Ezike said. “There’s a lot at stake and we can’t go for short-term wins at the cost of our society.

President Trump in recent days has floated the idea of easing up social distancing guidelines by April 12, Easter Sunday. Pritzker said he is concerned the president is ignoring the science.

“People will die. People will get sick. We need to make sure that we’re operating on the same playbook together to save people’s lives,” he said.

Pritzker added he will be “guided by science” regarding an eventual decision to lighten Illinois’ stay-at-home order, which currently lasts through April 7.

“As we look past the peak, we’ll certainly be evaluating whether there are measures that we can take,” he said, such as possibly easing the order for certain regions of the state.

The director of the Illinois Department of Corrections, the order states, has the authority to make exceptions. County sheriffs, however, want the decision reevaluated because they say it risks the health of inmates and guards because of overcrowding.

“Local sheriffs across the state believe this policy further puts every county across Illinois at higher risk, jeopardizes the safety of inmates and correctional officers, and requires local government to burden additional costs,” said Jim Kaitschuk, executive director of the Illinois Sheriffs Association, in a statement.

The other executive order allows notaries to witness the signing of forms if parties are using a two-way, audio-video communication.