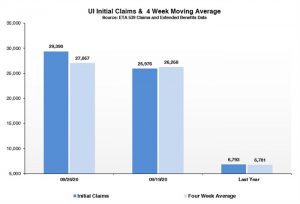 SPRIGNFIELD – The state announced another 2,126 confirmed COVID-19 cases and 25 virus-related deaths Thursday, Oct. 1 as new unemployment claims climbed from a week ago.

There were 29,390 initial unemployment claims for the week ending Sept. 26, which was an increase of 3,414, or 13 percent, from the week prior, according to the Illinois Department of Employment Security. New claims were more than four times higher than the same period a year ago.

Continued claims in Illinois decreased by 6 percent from the week prior, to 502,314, a decrease of more than 34,000 as COVID-19 and associated economic restrictions continue to wreak havoc on the job market.

The new cases of the disease announced Oct. 1 were among 65,615 test results reported, making for a one-day positivity rate of 3.3 percent. That brought to 3.5 percent the seven-day rolling average, which remained roughly level for the past two weeks.

The additional deaths — three of which were in persons aged in their 40s or 50s, the rest aged 70 or older — brought the virus-related death toll to 8,696 in the state. There have been 295,440 confirmed cases among more than 5.6 million tests completed.

At the end of Wednesday, Sept. 30, there were 1,635 persons reported hospitalized with COVID-19, including 359 in intensive care units and 149 on ventilators. Those numbers, which fluctuate considerably daily, were all slightly above their pandemic lows.

Region 1 of the state’s reopening plan saw its positivity rate move to 8.2 percent as of the latest data, a two-tenths of a percentage point decrease. That area includes the northwest section of the state. Beginning Saturday, Oct. 3, indoor dining and drinking at bars and restaurants will be prohibited in the region, which must decrease the rate to 6.5 percent or lower for three days to have mitigations lifted.

Region 4, which includes the Metro East area on the Missouri border, continued in an uptrend after a period of sustained decreases. The latest data showed the rolling positivity rate at 7.5 percent, which means it will have to decrease by a full percentage point and remain there for three days for mitigations which have been in place since the beginning of the month to be lifted.