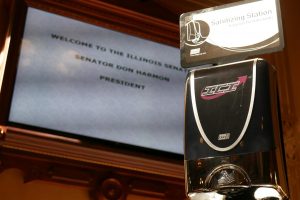 A sanitizing station sits largely unused outside the office of Senate President Don Harmon at the Capitol in Springfield. Because of COVID-19 containment measures, lawmakers have not returned to the Statehouse since adjourning March 5. Officials in the offices of Harmon and House Speaker Michael Madigan said Monday that conversations have been taking place among legislative leaders and their respective caucuses about when that return might happen, but as of yet no decision has been made. (Capitol News Illinois photo by Ben Orner)

SPRINGFIELD – The Illinois General Assembly on Monday, March 23 began its second week of shutdown due to the spread of the novel coronavirus disease, COVID-19, and officials said it is still uncertain when, or under what circumstances, the session will resume.

Officials in the offices of Senate President Don Harmon and House Speaker Michael Madigan said March 23  that conversations have been taking place among legislative leaders and their respective caucuses, but as of yet no decision has been made.

“For now, we continue to weigh legislative and procedural priorities so that when we return to session we can be effective and efficient while also protecting public health and safety,” Harmon’s spokesman, John Patterson, said in an email.

The last day lawmakers met was Thursday, March 5. They were scheduled to be off the following week, March 9-13, as many members campaigned in their home districts during the lead-up to the March 17 primary.

They were scheduled to return Wednesday, March 18, but several days before that Gov. J.B. Pritzker issued a disaster declaration and began urging Illinoisans to practice “social distancing.”

“The plan is to monitor and talk with the offices, and come back when it’s safe to come back, not only for members of the General Assembly but whatever arrangement we’ve made relative to the public meeting part,” Madigan’s spokesman Steve Brown said in a phone conversation.

The most important piece of legislation awaiting action is the state budget. Pritzker has proposed a $42 billion spending plan for the fiscal year that begins July 1, some of which depends on voters approving a constitutional amendment in November that would allow the state to levy a graduated income tax that levies higher rates on higher levels of income.

That budget, however, was built around assumptions that the state’s economy would continue growing at roughly the same rate it had been growing before the COVID-19 outbreak.

The outbreak, however, has forced many businesses to either close temporarily or scale back their operations while many of their employees have been furloughed.

That is certain to have a negative impact on sales and income tax collections for the remainder of the current fiscal year, and the revenue slump could continue into the next fiscal year.

Brown said the impact of such a slump could be eased depending on whether Congress approves an economic recovery package that provides aid to state and local governments. As of Monday, however, that recovery package was stalled in the U.S. Senate.

Meanwhile, there are a number of other bills pending that are considered “must-pass” legislation, meaning the state could face dire consequences if they fail to pass.

One of those is a renewal of the state’s hospital assessment program, which generates about $3.5 billion each year to help fund hospitals that treat large numbers of Medicaid patients. Under that program, hospitals are assessed a tax based on the number of inpatient and outpatient procedures they perform.

That money is then used to draw down federal matching funds and it is distributed back to hospitals based on the number of Medicaid patients they serve because Medicaid typically pays lower reimbursement rates than Medicare or private insurance.

Illinois launched that program in 1992 but it must be renewed periodically and each renewal must be approved by the federal government. The current program is set to expire on June 30.

Danny Chun, a spokesman for the Illinois Health and Hospital Association, said in an interview that conversations have been taking place behind the scenes about what the new program should look like, but he said time is a critical factor.

That’s because once a bill is passed and signed by the governor, the federal review process could still take two or three months.

Without the hospital assessment program, Illinois hospitals would lose $3.5 billion in revenue at a time when they could be under significant stress treating COVID-19 patients.

Chun said one of the options he has heard discussed would be to call the General Assembly back into session for a single day – possibly even half a day – just to pass a budget and a few other essential bills.

Patterson did not confirm or deny such a plan, saying in an email, “lots of options are being explored and discussed.”