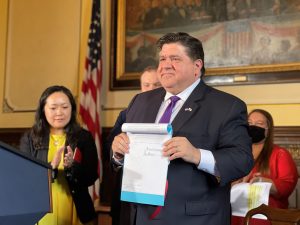 “This legislation recognizes the importance of teachers as members of the community, and in many cases, as parents. That’s why we’re also extending employee paid leave to cover their children’s needs,” said Gov. J.B. Pritzker on April 5 when signing House Bill 1167 into law. (Illinois.gov)

SPRINGFIELD – Public school, community college and public university employees who are fully vaccinated against COVID-19 are now entitled to paid administrative leave for any days they miss this school year due to coronavirus-related issues.

Gov. J.B. Pritzker on Tuesday, April 5 signed House Bill 1167 into law, which provides those employees as many days off as needed to abide by public health guidelines and mandates related to isolation and exclusion. The law applies to any employee of public educational institutions, including support staff and contractors.

It also applies retroactively to days missed this school year.

“It ensures that if a teacher has done their part to keep their classroom safe for their most vulnerable students, they won’t have to worry for a second about their pay or their paid time off if they get COVID, or if they’re required to isolate, or if the school has moved to e-learning and their work can’t be done at home,” Pritzker said during a bill signing ceremony in his Statehouse office.

Lawmakers initially passed a bill during last year’s fall veto session that provided paid leave for any education employee who had to miss work due to COVID-19, but Pritzker vetoed that measure in January because it also would have applied to unvaccinated employees.

At the same time he issued that veto, however, Pritzker announced he had reached a negotiated agreement with teachers’ unions, school districts, colleges and universities on a bill that would include a vaccine requirement for the benefit.

“Work in legislation is difficult. People don’t always agree. There are struggles and differences of opinion,” said Dan Montgomery, president of the Illinois Federation of Teachers. “And we’ve seen around the country, and certainly around the state, that those tensions are inflamed during COVID. But this bill is a sign that when you have good public servants of goodwill, who devote themselves to trying to figure out what’s the right thing to do, we can all work together and get it done and do it in a way that is better for learning, teaching, and the kids and their communities of the state.”

Angela Bulger, a special education paraprofessional in O’Fallon, said she has already missed eight school days this year due to COVID-19 — once when she contracted the virus and again when her 7-year-old daughter was exposed to the virus at school.

“As a new employee, I am allotted 11 sick days,” she said. “Without this legislation, any additional days missed because of COVID would also mean a cut in pay because I have no more earned sick days.”

The original bill passed the General Assembly in October with near-unanimous support, but the inclusion of a vaccination requirement to be able to receive the benefits sparked Republican opposition. They argued that unvaccinated employees who have to stay home to care for a sick family member would be deprived of a benefit that a vaccinated person in the same position would receive.

But Pritzker defended the vaccine requirement as a way to encourage more people to get vaccinated.

“What we’re trying to do, of course, is to encourage people to do the right thing to keep their students safe, to keep the rest of the school safe, by being vaccinated. That’s the whole purpose of that provision in the law,” he said.