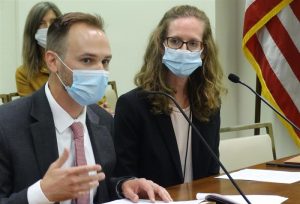 SPRINGFIELD — The state of Illinois will soon begin distributing $250 million in federal funds to help cities, counties and other units of local government pay for pandemic-related expenses.

The General Assembly’s Joint Committee on Administrative Rules cleared the way Tuesday, Aug. 11 for the Department of Commerce and Economic Opportunity to launch the Local Coronavirus Urgent Remediation Emergency, or Local CURE, program, which state lawmakers authorized in the budget they adopted in May.

Of that money, $200 million will go directly to cities and counties. The rest will be divided between local public health departments and other local units of government such as townships and other special taxing districts.

The money can be used for expenses such as COVID-19 testing and emergency medical expenses; public health expenses, including costs of enforcing orders related to COVID-19; payroll expenses for public safety and other employees whose jobs are mainly focused on mitigating or responding to COVID-19; and other expenses that are “reasonably necessary” for responding to the public health emergency.

DCEO used a formula to determine how much money each city and county will receive. Department spokeswoman Lauren Huffman said the agency will start distributing the money later this month.

One thing local governments cannot use the money for, however, is direct aid to local businesses that have been impacted by the pandemic. That is something that disappointed some local government leaders.

“The federal government says that communities can use these dollars for local economic support, but DCEO says we can’t,” Brad Cole, executive director of the Illinois Municipal League, said during an interview after the JCAR meeting. “And while the department says that local governments cannot use the funds for that purpose, the state reserves the right to use it.”

DCEO set up a separate program to help businesses impacted by the pandemic called the Business Interruption Grant, or BIG, program that will distribute about $636 million to businesses around the state.

Both the aid to local governments and the BIG program are funded with money the state received through the federal CARES Act. The city of Chicago as well as Cook, DuPage, Kane, Lake and Will counties are not eligible for the grants because they have populations over 500,000 and therefore received their own direct allocation of CARES Act funding.

Gov. JB Pritzker announced during a COVID-19 briefing in Chicago Wednesday that DCEO just awarded the first round of those grants totaling $46 million. He said the funding will go to more than 2,600 businesses located in 78 of the state’s 102 counties.

Phil Keshen, DCEO’s chief financial officer, said during Tuesday’s JCAR hearing that there had been many discussions between the agency and IML, and DCEO intends to make up to $30 million available to local communities working in conjunction with local businesses.

The main concern, Keshen said, is the potential liability to the state and the local governments if the funds are not used in strict accordance with federal rules or with the state’s Grant Accountability and Transparency Act, commonly known as GATA.

“The liability does remain on the state for the federal funds,” he said. “And so that’s part of the process of entering into grant agreement — to make sure that the audit requirements set forth by GATA are in place as well, and…making sure that both the local government knows what their role is in the grant-making process as well as what DCEOs role is.”