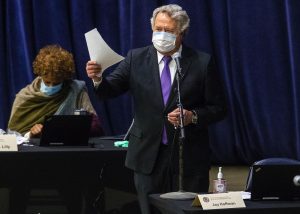 SPRINGFIELD – Measures addressing aggravated battery of retail workers, disability leave for public employees and unionization of employees in the horse racing industry found their way into a COVID-19-response bill this week at the Capitol.

The aggravated battery language in Senate Bill 471 was a subject of heated debate in the House on May 22, which often turned into a philosophical discussion as to whether “penalty enhancements” were worthy public policy.

Rep. Jay Hoffman, D-Swansea, who sponsored the bill, claimed that “penalty enhancement” was not the correct characterization of the measure, because “the individual action that would be a crime doesn’t exist. You can’t enhance something that didn’t exist previously.”

Strictly speaking, the bill amends the “aggravated battery” section of law by adding the crime of assaulting or battering a retail worker who is fulfilling duties such as relaying health care or safety regulations from an employer or public health agencies.

Rep. Marcus Evans Jr., D-Chicago, said the bill “sends a clear message” to workers in Illinois and across the country that they “must be respected and protected.” He said retail workers assaulted for telling people to wear masks showed that the bill is needed.

Rep. Anne Stava-Murray, D-Naperville, said a person striking a retail worker would already be guilty of a crime, so the measure is indeed an enhancement of the charge that would have been filed. She opposed such an enhancement and triggered a heated response from Hoffman, who shouted at her to “vote no” on the measure if she didn’t agree with it.

Rep. Tony McCombie, R-Savanna, said the measure was proof that penalty enhancements can be an effective tool. But Rep. Kelly Cassidy, D-Chicago, who said she opposes penalty enhancements in general, echoed Evans in saying it was about support for workers rather than increasing penalties.

“If we want to help the front-liners, let’s give them and their families some protection, some health care and a pay increase,” she said.

The measure did not directly reference COVID-19, but the penalty enhancement would be in effect “during a disaster declared by the governor, or a state of emergency declared by the mayor of the municipality in which the merchant is located, due to a public health emergency and for a period of six months after such declaration.”

In the Senate on Saturday, Majority Leader Kimberly Lightford, D-Maywood, said the measure could be reexamined by lawmakers in the fall veto session to make any necessary changes.

“I think it’s really important that we support those essential workers who are being attacked with some stricter penalties,” she said. “None of us in the Senate Black Caucus, of course, love these enhanced penalties, but we do know that we’re in a crisis and we have to act on this in this way.”

Another portion of the bill extended a one-year recovery period by 60 days for eligible public employees who are recovering from an on-the-job injury and their recovery is hindered, directly or indirectly, by COVID-19.

In House debate, Hoffman said that measure was spurred by firefighters who were injured in the line of work but unable to get the necessary treatment to move along in their recovery because of the COVID-19 pandemic.

Also per the bill, employees of a horse track that intends to become a combined track-casino, known as a “racino,” would be entitled, under the state’s new gambling expansion law, to receive information about forming a union if the track is to receive a state license.

Hoffman said Friday because horse racing is considered to be under the agriculture industry, track employees would otherwise not have certain collective bargaining rights. The measure, he said, was intended to give track employees access to rights available under the National Labor Relations Act.

“The intention is to give them rights, the right to organize, and get the information so that they could possibly organize and let them make that determination,” he said.

Rep. Keith Wheeler, R-Oswego, questioned some of the language in the bill, and Hoffman clarified that, per his legislative intent, the majority of the employees would have to choose to unionize in order for certain provisions to kick in.

Wheeler said the bill needed clarifying language that there are circumstances where a racino should be allowed to get a gaming license without filing a complete labor relations agreement, provided employees choose not to unionize. He ended up voting for the measure, however.

This portion of the bill received questioning in the Senate as well, where state Sen. Celina Villanueva, D-Chicago, noted it would apply to only the horse racing employees, not other employees of the facility.

In the Senate, Lightford said this portion of the bill could see adjustments in the fall veto session as well.

“This is an important initiative for those backstretch workers,” she said, detailing “deplorable” living conditions and low wages for track employees.

SB 471 passed with a 95-10 vote in the House, and Stava-Murray and Flowers were among the lawmakers opposing it. The bill passed 47-3 in the Senate.

The bill will need only a signature from Gov. J.B. Pritzker to become law, and it would take effect immediately when signed.