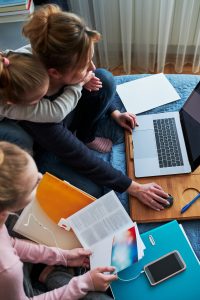 One of the main takeaways from the poll, according to IEA, was that nearly 8 in 10 adults believe the COVID-19 pandemic has made teaching and learning more difficult.

SPRINGFIELD – The Illinois Education Association, one of the largest teacher unions in the state, on Tuesday, March 23 released its third annual state of education report examining attitudes towards public education in Illinois.

The poll, conducted by Normington Petts and Next Generation Strategies, surveyed 1,000 different Illinois adults of varying backgrounds and regions of the state by phone or online.

One of the main takeaways from the poll, according to IEA, was that nearly 8 in 10 adults believe the COVID-19 pandemic has made teaching and learning more difficult.

Specifically, the poll asked, “Thinking about public school teachers in Illinois over the last year or so during the pandemic, do you think that teaching during the coronavirus pandemic has been much easier, somewhat easier, somewhat harder, or much harder for teachers?”

When it comes to the biggest impact of the pandemic on students, 44 percent said virtual learning challenges are the leading concern, while 29 percent said it’s the lack of socialization.

IEA President Kathi Griffin said virtual learning has also had an impact on teachers, who are now expected to teach students both in-person and virtually at the same time.

“You have teachers who are working these extremely long days, developing lessons on multiple platforms, assessing their work, communicating with parents and trying to take care of their own health and that of their family,” Griffin said. “That is what is so stressful.”

Griffin said there are other cases where students are sleeping in and joining virtual class late or parents are going on vacation because of the ability for students to work remotely.

“We want to make sure that our students are present, that they are going to participate, and that our families are supportive, and I know they’re working so hard,” Griffin said. “This is not easy for anybody, but we need to recognize the double duty that our teachers are doing right now.”

In some cases, Griffin said teachers are working 10 to 12 hour days teaching and preparing hybrid lessons. Griffin warned of the potential of pandemic-related burnout worsening the increasing educator shortage in the state. 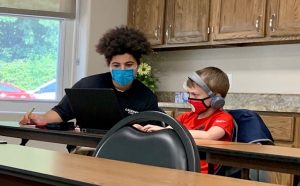 More than 44 percent said the biggest impact of the pandemic has been virtual learning challenges are the leading concern, while 29 percent said it’s the lack of socialization. (Photo courtesy of the IEA)

One-third of IEA members who were polled in October stated that they were considering leaving the profession, while two-thirds said they felt “more burned out than normal this year,” according to the report.

Of the 1,000 Illinois residents participating in the poll, 60 percent said they worry that educators leaving the profession will lead to lower student performance.

The poll found that 43 percent of adults believe health and safety are the most important issues to address as schools begin to return to normalcy. Getting students caught up, 22 percent of adults said, is the second leading concern.

As a result of the pandemic, the IEA and the Illinois Federation of Teachers will be introducing legislation to: establish clear metrics for districts to know when it’s safe to be in-person; enforce COVID-19 guidance and requirements in schools; provide rapid COVID-19 testing in schools; and provide protections so teachers won’t be forced to work while they’re sick.

Griffin said it will be important to continue funding the state’s evidence-based school funding formula, which became law in 2017.  That law changed the way school districts receive the bulk of state funds, calling for $350 million in new funding to be added to the K-12 formula each year to be directed at the state’s neediest districts based on a number of factors.

But last year, amid the COVID-19 pandemic, the state passed a budget including no new funding for schools, while Gov. J.B. Pritzker’s budget proposal for the upcoming fiscal year would keep K-12 education funding flat for the second consecutive year.

“We need to make sure that we continue that funding,” Griffin said. “Last year that funding was stagnant…but it should be increasing every single year. We need to continue to work and make that happen so that we don’t fall behind, because if we fall behind, who we are falling behind on are the kids, and we cannot do that.”

Although respondents shared concerns about health and safety in returning to school, as well as the lingering educator shortage, Griffin said “we’re seeing the light at the end of the tunnel.”

“But what we need to make sure that we do is support our teachers the best we can, realize that things are going to be different this year, and move forward,” she said.