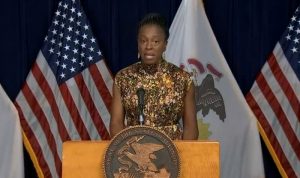 SPRINGFIELD – Will and Kankakee counties must lower their rolling COVID-19 test positivity rate by about one more percentage point before restrictions on economic activity can be lifted, Gov. J.B. Pritzker announced Thursday, Sept. 10 at a COVID-19 update in Chicago.

Those counties, which make up Region 7 of the state’s reopening plan, had a 7.5 percent seven-day average positivity rate as of Sept. 7, but it will need to decrease to 6.5 percent before coronavirus mitigations such as closures of indoor dining and drinking at restaurants and bars can be lifted.

Region 4 of the reopening plan, however, continues to see its positivity rate increase, moving to 10.1 percent as of Sept. 7. The only other region above 7 percent is north-central Illinois, which includes Peoria and several surrounding counties, which sat at 7.2 percent as of Monday.

“Last week I highlighted the trend over the previous two weeks that nine of our 11 regions had seen increases in positivity rates,” Pritzker said Thursday. “I’m pleased to say that over the last seven days, most of our regions have seen a slight decrease in their positivity rates, with only three seeing a statistically significant increase.”

Statewide, the positivity rate was 3.8 percent as of Sept. 10.

Pritzker cited Dr. Anthony Fauci, an immunologist and director of the National Institute of Allergy and Infectious Diseases, in justifying the 8-percent threshold as one needed to spur further state action in a given region.

“You can either close the bars or close the schools,” Pritzker said, referring to Fauci’s previous comments about rate of increase.

Pritzker said economic restoration cannot happen until the virus is under control.

“Unless we get it under control, either by people following the doctor’s recommended mitigations or with an effective treatment or a vaccine, we will be fighting to save the Titanic with a plastic bucket,” he said. “Because there’s no national strategy, it’s up to us — every individual and every city and every business in Illinois — to slow the rate of infection across the state, wear a mask. Watch your distance, don’t exceed capacity limits.”

The expansion of testing through a University of Illinois saliva-based testing program to other university campuses could take another six to eight weeks, but will depend on the U.S. Food and Drug Administration and manufacturing of equipment, Pritzker added.

Illinois Department of Public Health Director Dr. Ngozi Ezike once again noted the importance of the widespread use of face coverings.

What is known, Ezike said, is that a person with the virus can spread it even if they are not experiencing symptoms. Masks can help prevent the spread of respiratory droplets that a person expels when talking, she said.

“Models do suggest that public mask-wearing is most effective at stopping spread of the virus when compliance is high,” Ezike said. “That means the vast majority of people need to be wearing the face covering.”

Illinoisans should also get their flu shot in the coming days as well, officials noted.

IDPH announced 29 additional virus-related deaths over the previous 24 hours in people whose ages ranged from their 40s to their 90s. There were 1,953 new confirmed cases of the virus among 48,982 test results reported.

That brought the total confirmed cases since the pandemic reached Illinois to 255,643 cases, including 8,242 deaths among more than 4.5 million recorded test results.

At the end of Wednesday, the total number of persons hospitalized for the virus in the state grew to 1,609, including 346 in intensive care unit beds and 141 on ventilators. All numbers remained slightly above their pandemic lows and well off their highs.