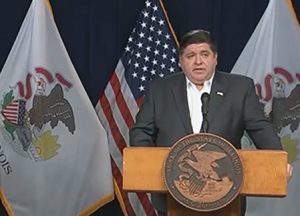 Gov. J.B. Pritzker said during a news conference Thursday, April 2 in Chicago that the federal government’s lack of early action in response to the novel coronavirus outbreak “will go down in history as a profound failure of our national government.” (Credit: blueroomstream.com)

Pritzker said his administration has “nearly exhausted every avenue available” to mitigate COVID-19’s expansion. It instituted a stay-at-home order, banned dining in at restaurants and bars, limited public gatherings and shuttered schools.

Now, the governor is asking Illinoisans to not only stay at home, but to celebrate it.

“All In Illinois” is a program encouraging residents to continue observing social distancing guidelines. Citizens can go to AllIn.Illinois.gov to pledge they will uphold best practices, post social media videos and add digital frames to online profiles in support of the effort.

Pritzker said he is “very, very proud” of those working and learning from home and essential personnel helping residents.

“I see you as tough as you are kind, as courageous as you are creative,” he said. “… All In is our anthem and our point of pride — Illinoisans staying home for the good of each other and for our state.”

Pritzker promoted the initiative during his daily news conference Thursday in Chicago, during which the latest rise in coronavirus cases and deaths were reported and the federal government’s early efforts were lambasted.

Twelve of the newly reported deaths were in Cook County, in people aged in their 30s to 80s. A total of 43,656 people have been tested, an increase of more than 3,000 from Wednesday.

COVID-19 is “not a death sentence,” Ezike said. The third and fourth patients confirmed to have the virus in Illinois, a couple in their 70s, recovered and are doing well, and a survey sent to those who contracted COVID-19 earlier this week found about 50 percent had recovered after seven days. That is a number Ezike said “will only increase.”

Pritzker and Ezike stressed Illinoisans need to continue staying home as frequently as possible and adhering to social distancing guidelines. Essential businesses, such as grocery stores, should be thoroughly cleaned daily and employers should send symptomatic workers home.

Ezike added religious institutions must hold services virtually, not in person, to do their part “to end this pandemic.”

“I understand the importance of communing with fellow believers,” she said. “… We all must make this sacrifice, then on the other side of this pandemic, we can gather at the mosque or synagogue, the church, the museum, the library — all of the places we love. We must not continue putting people at risk.”

Pritzker also criticized the federal government’s response in his strongest terms yet.

“I’m honestly upset about the lack of early action on a national basis. This will go down in history as a profound failure of our national government,” Pritzker said. “I’m telling you this, because in terms of state actions, state orders, we’ve nearly exhausted every avenue available. Now the rest is up to you.”

Pritzker announced Westlake Hospital in Melrose Park is the fourth medical field station established in the Chicago area to alleviate the crush of COVID-19 cases at hospitals. It holds 230 beds.

The three other facilities are Sherman Hospital in Kane County and Metro South Center in suburban Cook County, which combined can accommodate more than 500 patients, and Chicago’s McCormick Place, which, when completed, will house 3,000 beds.

A central Illinois location is being worked on, the governor added.

“These temporary facilities are meant to support, not replace, our existing medical infrastructure,” Pritzker said.  “Patients will be directed first to existing hospitals and if they are lower acuity, they will be transferred to alternative sites.”

Increasing the availability of medical care for those who contract the novel coronavirus will buoy the medical system if too many Illinoisans get sick at the same time.

“This is a novel coronavirus, which basically just means it’s new to humans,” Pritzker said. “There’s no vaccine, and no one is immune.”

The Pritzker administration is continuing to review and commute the sentences of vulnerable inmates and those with nonviolent offenses to mitigate potential spread among prison populations.

Sentences for pregnant women or those with babies, retail shoplifters and those incarcerated on narcotics chargers have been commuted.

“We had more than 1,000 fewer prisoners in prison today than we had on February 1,” Pritzker said.

On Tuesday, the state announced an outbreak at Stateville Correctional Center in Crest Hill, with 32 cases reported and more tests pending.

Ezike said people who were infected at Stateville were moved into a separate part of the facility, and the number hospitalized from the facility decreased to 16 Thursday from 19 Wednesday.

“Again, here’s another glimmer of hope — three people recovered and were released from the hospital,” she said.

That system was remodeled in 2010 to handle the number of claims the department then expected to receive. But “this is the biggest onslaught of unemployment claims, I think, ever,” the governor said — more so than during the recession in 2008-09.

His administration is working with IDES and the Department of Innovation Technology to solve issues of long call center wait times and online portal crashes, but in the short term people applying for benefits are being asked to do so on an alphabetized schedule.

Indiana and Michigan governors have canceled in-person classes for the rest of the school year. When asked whether he was considering similar action, Pritzker said, “I don’t really have a good answer for you.”

“Will school be canceled for the rest of the year is really a decision that will get made as we get closer, as we enter a peak period whenever that may be — sometime, we think, in the later half of April,” the governor said. “(When) we start to come off that peak, I think we’ll start to be able to make some decisions about what does May look like.”

The state’s public and private schools are ordered closed through April 30, coinciding with the statewide stay-at-home order.