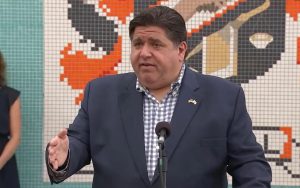 Gov. J.B. Pritzker speaks Monday, July 20 during a press event in Peoria. The governor voiced his support for efforts by the mayors in Springfield and Chicago to enact policies aimed at limiting the spread of COVID-19 at bars. (blueroomstream.com)

SPRINGFIELD – Gov. J.B. Pritzker on Monday, July 20 gave support to a pair of Illinois mayors who recently enacted policies aimed at limiting the spread of COVID-19 in bar and tavern settings.

Pritzker specifically referred to actions by Springfield Mayor Jim Langfelder, who signed an order creating fines for bars and restaurants that fail to comply with social distancing and capacity rules, and Chicago Mayor Lori Lightfoot, who announced Monday morning that the city would stop bars that don’t serve food from serving alcohol indoors starting Friday.

“I want to commend local leaders taking action to keep their communities safe, and the state stands behind these municipalities in their efforts,” Pritzker said at an event Monday in Urbana. “Our city and county leaders, with case numbers and hospitalizations rising and localized information about outbreaks readily available, can and should do what they know is right to protect their residents.”

His words of support came as the state announced another 1,173 confirmed cases of the coronavirus over the previous 24 hours, as well as six more virus-related deaths. That brought the total since the pandemic first reached Illinois to 162,748 cases, including 7,301 virus-related deaths.

Laboratories reported 34,598 test results the previous 24 hours, making for a one-day positivity rate of 3.4 percent, which brought the rolling seven-day rate back to 3 percent after two days at 2.9 percent.

Hospitalizations remained stable near their pandemic lows at the end of Sunday as well, with 1,410 people in Illinois in the hospital with COVID-19, including 308 in intensive care unit beds and 133 on ventilators.

In a pair of public appearances, Pritzker touted Illinois as “the best of all of our neighbors” in suppressing the positivity rate. Aside from Michigan’s 2.7 percent rolling positivity rate, Illinois’ is the lowest in the Midwest.

But he said there’s still room for improvement as the positivity rate and hospitalizations for the virus have leveled, instead of seeing continued decreases.

“I worry about that because our numbers should be going down when actually they’re about steady,” he said when asked about a rise in cases potentially moving the state backward in its reopening plan. “And that’s not a good development – steady is better than up, I mean, let’s face it. But what should be happening is, we should continue the downward slide.”

He once again touted the importance of wearing face coverings, saying “above almost everything else it is what will keep you healthy and safe.”

“You don’t have to belittle people who aren’t wearing a mask, but they should get the idea when everybody else is wearing a mask,” he said. “If I told you that you could take a pill that would reduce your likelihood of getting COVID-19 by 80 percent, wouldn’t you do it? Well that’s what masks do.”

He said there was a “crisis of leadership” in the national response to COVID-19, once again calling out President Donald Trump.

“Having a president who does not wear a mask and does not encourage everybody to wear a mask is a problem. Not to mention denying science,” he said.

At the two public events —one in Urbana and one in Peoria — he also took questions about House Speaker Michael Madigan and a recent court document that implicated — but did not charge — the longtime legislative leader in a bribery scheme.

The governor reiterated there will be many questions for Madigan to answer, but did not specifically call for Madigan’s resignation or address if he would call for a special legislative session to focus on ethics reforms.

He did call for lobbying reforms, such as prohibitions to lawmakers becoming lobbyists immediately upon retirement.

“I talked quite a lot about this in my annual state of the state speech this year. I called for major ethics reform in that speech. Then what happened – that was February, I believe, or late January — what happened? COVID-19 hit and there was now a four-day session of the Legislature as a result of the pandemic. So I’m hoping that in November, that will be able to take up again, the work by the way of the Ethics Commission, that was put together in the General Assembly.”