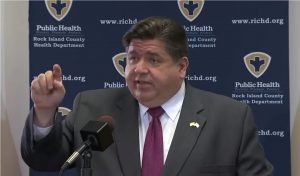 Gov. J.B. Pritzker answers questions from reporters during a news conference Monday at the Rock Island County Health Department in Rock Island to provide an update on COVID-19 in Illinois. ( illinois.gov photo)

SPRINGFIELD — Illinois’ seven-day rolling positivity rate for COVID-19 tests continued to rise through the weekend, reaching 3.8 percent — more than a full percentage point higher than it was at the beginning of the month.

That comes after one-day positivity rates of 3.7, 3.8 and 4 percent on Saturday, Sunday and Monday, respectively. Over that three-day span, the state averaged about 1,399 new cases daily among an average of 36,537 tests completed over the same period.

Speaking Monday, July 27 in Adams County, which is in the state’s warning territory for COVID-19 trends, Gov. J.B. Pritzker continued to urge Illinoisans to wear masks and avoid crowds. Those measures will likely be necessary though at least the end of 2020, he said.

Sen. Jil Tracy, R-Quincy, appeared alongside the governor at the Adams County Health Department in Quincy. She urged all residents to wear face coverings, which a number of studies have shown can help limit the spread of the virus.

The senator called mask-wearing a “minor inconvenience” that is “so well worth it” to prevent the spread of the lethal virus.

“We learn new things about this virus every day. But one indisputable fact is that it’s highly, highly contagious,” she said. “…Even those that get very sick, and don’t die, they have lingering health problems. Wearing a mask, I advocate (for), because it is such a simple thing to do.” 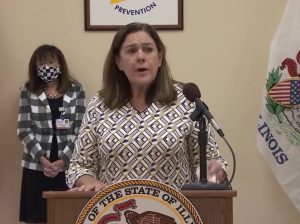 Sen. Jil Tracy, R-Quincy, urges Illinoisans to wear a face covering to prevent the spread of the novel coronavirus. She spoke at a news conference Monday, July 27 at the Adams County Health Department in Quincy with Gov. JB Pritzker to urge caution in dealing with the virus. (illinois.gov photo)

“If these trends continue in a negative direction, the state will need to take immediate action to impose additional mitigations to slow the spread and keep more people from getting sick. We are trying to bring down infection rates before it gets out of control,” Pritzker said in Adams County.

The metrics “are intended to be used for local level awareness to help local leaders, businesses, local health departments, and the public make informed decisions about personal and family gatherings, as well as what activities they choose to do,” according to an IDPH news release.

“We’re counting on city and county health departments and leaders do what they know is right to protect their residents,” Pritzker added, noting those efforts include ticketing or closing bars that flout masking and social distancing guidelines.

In Adams County, that includes larger social events, health care exposure, travel to hotspots including neighboring Missouri and Iowa, as well as outbreaks tied to places of worship and youth sports.

In LaSalle County, outbreaks were tied to large family and social gatherings, while there were increases in cases among people younger than 29 years, many of whom visited bars or attended larger social events. “Inconsistencies with masking requirements” played a role as well, according to IDPH.

Peoria County also saw increases in cases among people younger than 29 years old, while outbreaks were tied to large gatherings such as Fourth of July parties, and people traveling to Florida, Iowa, Texas and Wisconsin.

Randolph County outbreaks were tied to congregate settings, numerous bars not complying with distancing and masking, and a large party with more than 200 people.

The IDPH website, which is updated weekly, was still showing warning indicators as of July 18 on Monday afternoon, and Sangamon, Champaign and Randolph counties were the only three flashing an orange warning indicator.

IDPH also reported 31 more COVID-19-related deaths over the past three days, bringing total fatalities since the pandemic began to 7,416 among 172,655 confirmed cases. There have been more than 2.5 million tests performed in the state and the recovery rate from the virus is 95 percent for those 42 days removed from a positive test, according to the IDPH.

At the end of Sunday, July 26, there were 1,417 COVID-19-positive patients in hospital beds statewide, including 125 on ventilators. Both of those numbers were near their pandemic lows, although they were increases from the day prior.

While Pritzker said the state is doing a better job handling the virus than its neighbors and others in the South, it does not take long for cases to spike.

“I can’t tell you what’s gonna happen Aug. 10 or any date in August yet,” he said. “What I can tell you is we’ve issued guidance for what we know right now, but we’re all gonna have to keep watching.”