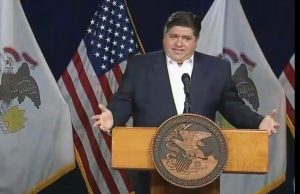 SPRINGFIELD – Gov. J.B. Pritzker urged southern Illinoisans to continue to comply with a stay-at-home order and named a pair of counties where the rate of those killed by the virus is higher than in Cook County.

As he was speaking at his daily briefing Monday, April 27 in Chicago, however, a Clay County judge was ruling against his authority to implement such an order.

When told by reporters that the judge had ruled against his stay-at-home order, Pritzker blasted Republican Rep. Darren Bailey, of Xenia, who filed the lawsuit challenging it.

“People are in danger as a result of this ruling, of the judge’s ruling of the suit that was brought by Darren Bailey,” Pritzker said. “We certainly are going to act in a swift fashion to try to have this ruling overturned, certainly put a stay in place.”

The lawsuit, and therefore the judge’s order, applies specifically to Bailey, who asserted that Illinois law grants the governor emergency authority for a period of 30 days, not to be extended. Pritzker first declared disaster on March 9, and has since extended the declaration and his stay-at-home order through May 30.

Pritzker has said extensions of disaster declarations are common, and he did so in response to flooding last year.

The Effingham Daily News reported that while Bailey is the only person freed from the stay-at-home order under the lawsuit, his attorney, Thomas DeVore, told the newspaper the decision opens the door for others who disagree with the governor’s action to file their own lawsuit.

While Pritzker has called the suit “political,” Bailey said in a news release he filed the lawsuit “on behalf of myself and my constituents who are ready to go back to work and resume a normal life.”

The governor said the attorney general’s office is handling the appeal process.

“My team and I will fight this legal battle to the furthest extent possible, to ensure the public health and common sense and that those prevail,” Pritzker said. “In the interim, we will be issuing new public health directives, so that we can continue to respond to this public health crisis.”

“At this time I strongly encourage all municipal level leaders, as well as the people of Illinois, who are our strongest weapon against this virus, to follow the advice of our scientists here in Illinois and across the nation,” Pritzker said.

Earlier in the news conference, Pritzker stressed that despite the fact that 1,347 of 1,983 deaths have occurred in Chicago and Cook County, two of the top five counties in infection rate are downstate. The top five include Cook, Jasper, Lake, Will and Randolph counties. ((IDPH map with cases by county)

“That means you’re more likely to die of COVID-19 if you live in either of those two counties than if you live in Chicago or in Cook County,” Pritzker said.

He said while the Chicago area has most of the cases, it also has about two-thirds of the state’s population and most of its hospital capacity.

“COVID-19 knows no county or regional boundaries. It’s clear that some people are simply looking at the number of cases in a county and not looking at the infection rate,” he said, later adding, “The decisions have most often been very difficult, often choosing between saving lives and saving livelihoods. But thousands of Illinoisans are still with us today because nearly all of you have made an earnest effort to follow our stay-at-home order.”

Pritzker said on April 6, there were 3,680 COVID-19 patients in Illinois hospitals, and that had increased to 4,672 as of midnight Sunday, marking an increase of nearly 1,000 in one month and 73 in one day.

Ezike said that although understanding of the virus changes daily, the best way to fight it is still to stay home, wash hands, clean frequently-touched surfaces and keep distance from others.

“I know we’re growing weary of hearing this, but there are still people out there who are not taking this pandemic seriously and are not following this guidance,” she said. “We must all do our part to get back to the sense of normalcy, which could be pushed back if all of us are not working in concert.”

When asked if large gatherings would be allowed anytime this summer, Pritzker said he did not yet have an answer.

“You know, we’re making plans for the phased reopening of the economy,” he said. “It’s unclear to me about large gatherings. Those seem like harder things to get done than, for example, opening manufacturing facilities where you could be able to keep people six feet apart wearing (personal protective equipment).”