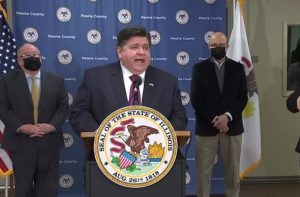 SPRINGFIELD – Gov. J.B. Pritzker said Wednesday, Feb. 22 the state expects to be receiving up to 100,000 doses of a COVID-19 vaccine daily by mid-March, up from the approximately 60,000 it is currently receiving on average.

That’s counting only the already-approved Moderna and Pfizer-BioNtech vaccines, and is not including a potential dosage spike that is expected occur if the U.S. Food and Drug Administration approves a Johnson & Johnson vaccine this week.

The FDA released an analysis Wednesday showing the Johnson & Johnson vaccine has met the requirements for Emergency Use Authorization, which is the same approval given to the two existing vaccines. The analysis showed the vaccine is 66 percent effective against moderate to severe COVID-19 globally, and an FDA panel is scheduled to meet Friday, Feb. 26 to consider recommending authorization.

Pritzker said during a stop at a vaccination site in West Peoria that even without the new vaccine, White House projections and promises from vaccine manufacturers indicate the state will receive the 100,000 daily doses by mid-March. That number could be increased by 20 percent with approval of the new vaccine.

Peoria County Public Health Administrator Monica Hendrickson said the 66 percent effectiveness rate is less than the roughly 95 percent rate seen with the first two vaccines, but it’s still more effective than the seasonal flu vaccine, which hits roughly 40-60 percent depending on the year. The Johnson & Johnson shot is also a one-dose vaccine, unlike the two existing vaccines, which require two doses.

“You’re looking at a distinction that from a clinical standpoint, or from an epidemiological standpoint, is very minor compared to what we really are hoping for which is decreases in death and decreases in severe illness where they all match up between the three vaccines,” she said. “The most important thing, though, is that when these vaccines come on the market, if you have an option to any of these three, get one of them.”

While Pritzker said nearly one in seven Illinoisans has had at least one dose of a vaccine, he said he could not predict when the state can progress from Phase 4 of reopening to Phase 5, which is essentially back to normal with larger public gatherings allowed.

Entering Phase 5 is dependent on a widely available vaccine or treatment, or the end of the virus’ spread.

“I’ve said from early on that what we need is an effective vaccine that we can widely distribute or a very effective treatment that we could widely distribute and we’re getting there,” he said.  “We need to get closer to herd immunity for everybody to feel that we are beyond Phase 4, and for us to actually be able to reopen everything entirely.”

On Tuesday, Feb. 23, the state reported 55,947 doses of the vaccine administered, bringing the seven-day rolling average to 58,141. About 4.9 percent of the state’s population has received two doses of the vaccine, which over 14 percent had received at least one dose, according to a database maintained by the New York Times.

That database showed the state was 20th of all the 50 states in first doses given per capita, yet 49th for those having received two doses. Pritzker attributed that to the state’s delay in opening up the vaccination effort to Phase 1B, noting officials intentionally remained in Phased 1A an extra week in what he said was an effort to ensure all health care workers received their first shot.

Health departments are now receiving a majority of second doses, he said.

The state is also planning on expanding Phase 1B eligibility Thursday to include individuals older than 16 years of age who have comorbidities and preexisting conditions.

As of Tuesday night, there were 1,511 individuals hospitalized with COVID-19 in Illinois, including 338 in intensive care unit beds and 172 on ventilators. Those numbers continued on a relative downward trend.