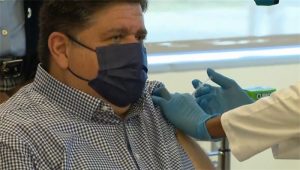 SPRINGFIELD – Gov. J.B. Pritzker became one of the 800,000-plus Illinoisans who have received a COVID-19 vaccine booster shot Tuesday, Nov. 2 ahead of his first overseas trip as governor.

Pritzker and his top staff planned to depart to London on Tuesday to meet with business leaders on economic development opportunities in Illinois before heading to Glasgow, Scotland, on Friday, Nov. 5 for the United Nations Climate Change Conference of the Parties.

Pritzker received a booster dose of the vaccine manufactured by Pfizer and BioNTech after receiving the one-dose Johnson & Johnson vaccine in March. He noted the U.S. Food and Drug Administration recently authorized “mixing and matching” vaccines.

He also said he was not worried about potential side effects, which usually last about a day and include fatigue or pain at the injection site, as he prepared to depart to London on Tuesday night.

Pritzker and Illinois Department of Public Health Director Dr. Ngozi Ezike also took questions about whether the state would require vaccination for children to attend school.

Ezike said the U.S. Centers for Disease Control and Prevention is considering only emergency use authorization for the Pfizer-BioNTech vaccine for children ages 5-11. That approval could come as early as this week.

Ezike said any decision on mandates wouldn’t be considered until full approval is granted.

“So I think it’s premature to think about requiring those for school,” she said. “We probably would want it to have the standard authorization, …such as what we have for Pfizer for individuals who are 18 and over.”

Ezike said while no vaccine requirement is currently being considered, “that probably could change much further down the line.”

Pritzker said any mandate would have to go through the state’s General Assembly.

“Here in Illinois, that requirement is something that would go through the legislature as others have,” he said. “We require lots of vaccinations, as you know, when kids go to school already, to make sure that kids don’t get polio, to make sure they don’t get measles and mumps and rubella and so on.

Pritzker and Ezike urged all eligible Illinoisans to receive the booster shot.

Eligible populations for the Moderna and Pfizer-BioNTech vaccine are those 65 years of age and older, and those 18 and older who live in long-term care settings or work or live in high-risk settings and had their last dose at least six months ago.

Those who received the Johnson & Johnson vaccine are eligible if they are 18 years of age or older and have received the first dose at least two months ago.

Pritzker said with approval imminent, parents of children ages 5 to 11 who wish their children to be vaccinated should call their pediatricians to schedule a shot or reach out to schools to request a vaccine clinic be hosted there. Vaccines remain free, he said.

The COVID-19 test positivity rate sat at 2 percent Tuesday and hospitalizations were flattening, putting Illinois well ahead of where it was in the pandemic one year ago. But greater vaccination will help halt a greater winter spread, the governor said.

Approximately 70 percent of the state’s population aged 12 and over are fully vaccinated for COVID-19, with 76 percent having received at least one dose.

Ezike said unvaccinated individuals between the ages of 30 and 49 are 18 times more likely to die of COVID-19 than people of that same age who are vaccinated.

Pritzker said his administration watches hospitalization and positivity rate numbers daily when considering what to do with masking requirements.

“New hospitalizations are flat,” Pritzker said. “That is not a good sign. That’s not what’s happened in previous dips from surges. We went down for a while here, but now we’ve leveled out at a level that is much higher than the summer. And so the question is, is that just a temporary situation?”

In the summer the positivity rate dipped to 0.6 percent and the number of hospital beds in use by COVID-19 patients briefly dipped below 400, with intensive care unit beds in use in one day falling as low as 76.