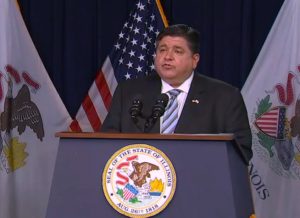 SPRINGFIELD – Gov. J.B. Pritzker said Wednesday, Jan. 19 that he is “cautiously optimistic” that the recent surge in COVID-19 cases spurred by the omicron variant has peaked, but he cautioned that another variant could appear at any time and continued to urge people to get vaccinated and wear face coverings when in public.

“Over the last two years, I’ve said over and over that you don’t know when a surge has reached its peak until you’re on the other side of it,” Pritzker said during a news conference in Chicago.

Of those hospitalized, 1,085 were in intensive care units and 608 were on ventilators, also high numbers but still down from their peaks of about a week earlier.

On Wednesday, Jan., 19, the Illinois Department of Public Health reported 26,491 new cases of the virus out of 194,306 tests performed. Over the previous seven days, the case positivity rate averaged just over 12 percent. But IDPH Director Dr. Ngozi Ezike said the reported number of cases is no longer the most important statistic to track.

“I am absolutely moving away from the cases because we know that that’s not even the full story, given all the home tests and all the positives that are happening at home that are not recorded in any of our Department of Public Health databases,” she said. “But the hospitalizations, you can’t hide a hospitalization. And so as we look at those hospitalizations and understand where those numbers are going, …that is definitely a clear signal of the direction we’re moving in.”

The news conference took place on the same day the U.S. Postal Service officially opened a new website on which people can order free home testing kits. Every household can order a package of four individual rapid antigen tests that will be shipped in late January. That website is https://special.usps.com/testkits.

Despite the downward trend, Pritzker and Ezike both urged residents to get vaccinated, to get booster shots when they’re eligible and to continue wearing face coverings in public places.

“The omicron surge has tested and proven once again that vaccines and masks are our best tools to keep most people safe from each variant of COVID-19,” Pritzker said. “Nevertheless, omicron’s high transmission rate caused more COVID hospitalizations than ever before. The vast majority unvaccinated. Our hospital systems and health care workers have battled to treat and to save not just COVID-19 patients, but every patient who walks through their doors.”

Pritzker noted that some hospitals in Illinois have been strained so much that they are reaching out to the Federal Emergency Management Agency for help. On Tuesday, Jan. 18 he said, more than two dozen health care workers were deployed to Ingalls Memorial Hospital in Harvey, a south suburb of Chicago. That’s in addition to the 22 workers deployed last week to the Javon Bea Hospital-Riverside in Rockford.