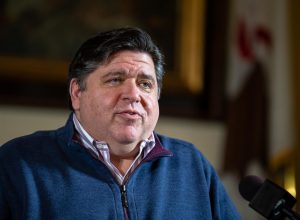 Gov. J.B. Pritzker answers reporters’ questions during a news conference May 21 in his office at the Capitol in Springfield. Pritzker on Thursday, May 28 said religious services will be allowed beginning Friday despite guidelines requiring public gatherings be limited to 10 or fewer people when Phase 3 of his reopening plan begins. (Credit: Justin Fowler/State Journal-Register of Springfield)

SPRINGFIELD – People in Illinois will be allowed to attend worship services starting this weekend without fear of prosecution as the state enters Phase 3 of Gov. J.B. Pritzker’s “Restore Illinois” reopening plan.

Pritzker made the announcement during his daily COVID-19 briefing Thursday, May 28 in Chicago, the same day a new lawsuit was filed in Lake County Circuit Court challenging the ban on public gatherings of more than 10 people as it applied to worship services.

It also came on the same day the U.S. Supreme Court was preparing to decide whether it would hear the appeal of another case involving two churches in Chicago that were challenging the ban.

“Having received many plans and ideas from responsible faith leaders, (the Illinois Department of Public Health) has reviewed many detailed proposals and has provided guidance —not mandatory restrictions — for all faith leaders to use in their efforts to ensure the health and safety of their congregants,” Pritzker said. “This includes suggestions on capacity limits, new cleaning protocols, indoor gatherings of 10 persons or less, a reduction of activities like sharing food and the safe conduct of outdoor congregating.”

“The safest options remain remote and drive-in services,” he added. “But for those that want to conduct in-person activities, IDPH is offering best practices.”

Earlier in the day, the Thomas More Society, a conservative public-interest law firm based in Chicago, filed suit in Lake County on behalf of five local churches and their pastors who said they intended to hold worship services anyway on Sunday, which is the Christian holy day of Pentecost.

“This is a total and complete victory for people of faith,” Peter Breen, vice president and senior counsel of the Thomas More Society, said in a statement. “Illinois’ governor and his administration abused the COVID-19 pandemic to stomp on the religious liberty of the people of Illinois. By issuing guidelines only and not the previously announced mandatory restrictions, he has handed a complete victory to the churches in Illinois.”

The Thomas More Society also represented the Beloved Church, in Lena, when it challenged Pritzker’s order in federal court in late April. And it represented the Jesus House Restoration Ministries in Urbana, which caters mainly to people struggling with homelessness and substance abuse, in another federal lawsuit filed May 12.

Another legal advocacy group, the Florida-based Liberty Counsel, filed suit on behalf of two Chicago churches. That request for a temporary restraining order was rejected in U.S. District Court as well as the 7th U.S. Circuit Court of Appeals. But attorneys in that case appealed to the nation’s high court and on Wednesday, May 27 Justice Brett Kavanaugh, who oversees the 7th Circuit, gave the Illinois attorney general’s office one day to file a reply brief so the court could decide whether to hear the case.

All of those cases argued, in one form or another, that Pritzker’s stay-at-home order as it applied to churches interfered with individuals’ freedom of religion. The federal cases were based on the U.S. Constitution’s guarantee of the free exercise of religion, while the Lake County case focused on the Illinois Constitution and the state Religious Freedom Restoration Act.

Governments can and do put restrictions on churches on a regular basis. Churches are, for example, subject to local building codes and fire safety regulations, and those codes often put limits on the number of people who can be in the building at one time.

During an interview Thursday, however, Breen argued those laws apply uniformly to religious and secular facilities alike. Pritzker’s executive orders, he argued, singled out churches while other businesses such as supermarkets, manufacturing facilities and meat processing plants were allowed to operate without capacity restrictions.

“There’s no constitutional right to run a meat packing plant; there is an express constitutional right to have a church,” he said. “So, this is the problem that we’re pointing out, which is you’ve singled out churches for different treatment. And there are plenty of other places in society today that are fully open, that are more dangerous than a church.”

In a ruling May 19 denying Liberty Counsel’s request for a temporary restraining order, a three-judge panel of the 7th Circuit disagreed with that argument.

“The Executive Order’s temporary numerical restrictions on public gatherings apply not only to worship services,” the panel wrote, “but also to the most comparable types of secular gatherings, such as concerts, lectures, theatrical performances, or choir practices, in which groups of people gather together for extended periods, especially where speech and singing feature prominently and raise risks of transmitting the COVID-19 virus. Worship services do not seem comparable to secular activities permitted under the executive order, such as shopping, in which people do not congregate or remain for extended periods.”

Before Pritzker’s announcement Thursday, a number of churches around the state had been targeted for enforcement action, including the Jesus House Restoration Ministries which received a cease-and-desist notice from the Champaign-Urbana Public Health District in April.

Although churches now will be able to operate without fear of prosecution, IDPH said it still does not encourage them to hold indoor services with large congregations.

“Indeed, it is strongly recommended that places of worship continue to facilitate remote services, particularly for those who are vulnerable to COVID-19 including older adults and those with co-morbidities,” the agency stated in the new guidelines. “Even with adherence to physical distancing, multiple different households convening in a congregational setting to worship carries a higher risk for widespread transmission of the virus that causes COVID-19, and may result in increased rates of infection, hospitalization, and death, especially among more vulnerable populations.”

The new IDPH guidelines for in-person services are substantially similar to those issued recently by the U.S. Centers for Disease Control and Prevention. They still encourage limiting attendance and offering multiple small services instead of one large one. They also encourage churches to thoroughly clean and disinfect their facilities, to practice physical distancing, avoid singing and group recitations and to discontinue serving food and beverages.