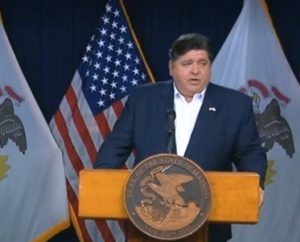 SPRINGFIELD – Gov. J.B. Pritzker and Chicago Mayor Lori Lightfoot announced Wednesday, April 1 the formation of a new relief fund to support artists and performers who have been temporarily put out of work by the COVID-19 pandemic.

The Arts for Illinois Relief Fund will provide financial assistance in the form of grants to artists, artisans and cultural organizations that have been impacted by the virus. The fund is a partnership between the city of Chicago, the state of Illinois and several charitable foundations.

Pritzker highlighted the new fund during his daily COVID-19 media briefing in Chicago on the same day the Department of Public Health announced 986 new confirmed cases and 42 deaths from the disease over the previous 24 hours.

That brings the state’s total to 6,980 cases, including 141 deaths, in 56 counties. The 42 deaths were the largest reported in one day thus far.

Ezike and Pritzker both continued to stress that the best way to slow the spread of the disease is to practice enhanced hygiene – washing hands; wiping down frequently-touched surfaces – and social distancing, including the state’s stay-at-home order.

Pritzker highlighted several ways in which that order has affected daily life in Illinois, including the lives of artists and performers who depend on public gatherings to display their work.

“Art has always been of incredible importance to me and to my family. But of course, so many of the usual ways of enjoying art together, have had to be put on pause. And tragically, our creative communities have felt the financial hardship,” Pritzker said.

Pritzker said the relief fund has raised more than $4 million so far, including $1 million from the Chicago Department of Cultural Affairs and Special Events. Artists can apply for grants and individuals can make donations through the program’s website: artsforillinois.org.

Chicago artist Amanda Williams said she has seen first-hand how the shutdown of social activity has affected people throughout the arts community.

Pritzker also noted that Wednesday, April 1, was Census Day in the United States. All people are required to report where they resided on that day. But the numbers are also used to determine how hundreds of billions of dollars in federal spending are distributed, including roughly $34 billion per year that flow to Illinois for things like education, child care, workforce training, transportation and health care.

The U.S. Constitution requires a census of all residents be conducted every 10 years in order to apportion representation in the U.S. House of Representatives.

The state of Illinois is spending $29 million as part of an effort to get an accurate count, and Pritzker said because of the outbreak, the state is now focusing that money mostly on outreach programs that target hard-to-count populations – rural communities, minority communities and low-income individuals and families, among others.

He also noted that because of the pandemic, the U.S. Census Bureau has temporarily suspended sending census workers into the field to do door-to-door canvassing of people who have not yet filled out their census forms.

People can fill out their census forms online this year, even by using a smartphone, by visiting My2020Census.gov. It can also be completed by phone at 844-330-2020.

Pritzker also said Wednesday that more than 1,100 former health care professionals and those who practice out of state have responded to his call to renew or apply for licenses in Illinois so they can join the workforce treating COVID-19 patients.

He said many of the out-of-state practitioners are actually Illinois residents who practice in border communities just outside the state.

“Right now those numbers are running about half-and-half, with more applications coming in every day,” he said. “It’s really incredible to watch. The people of this state are truly so deeply genuinely caring.”

But Pritzker had less kind words to say about President Donald Trump, who reportedly has refused requests by Democratic and Republican governors to reopen the enrollment period for people seeking insurance coverage under the Affordable Care Act.

“Some White House officials are saying that the President will not be reopening the insurance marketplace in response to the coronavirus,” Pritzker said. “Frankly, this is leadership malpractice. Now more than ever, we need as many people as possible to have access to health care to seek out testing if we’re ever going to be able to fight COVID-19 and eliminate it as a major risk to our people.”