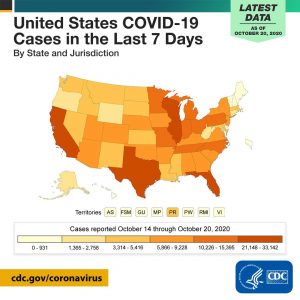 SPRINGFIELD – Starting Friday, Oct. 30, Chicago will be the seventh of 11 regions of the state’s COVID-19 mitigation plan due for increased economic restrictions, including the closure of bars and restaurants for indoor service.

Two other regions are above the 8 percent positivity rate threshold that, if sustained for three days, would subject them to the same mitigations, and the other two non-mitigated regions are quickly nearing the threshold as well.

“Region 11 (Chicago) is now averaging more than twice as many COVID-related hospital admissions per day as it was a month ago, with a positivity rate that has almost doubled since the beginning of October,” Gov. J.B. Pritzker said in a news release. “We can’t ignore what is happening around us — because without action, this could look worse than anything we saw in the spring.”

Hospitalizations for COVID-19 continue to increase across the state. As of Monday night Oct. 26, the state reported 2,758 people in Illinois were hospitalized with COVID-19, including 595 in intensive care unit beds and 241 on ventilators. Those numbers were once again new highs since early to mid-June.

“Based on current trends, we soon could face reduced hospital bed availability and overwhelming our health care systems,” Illinois Department of Public Health Director Dr. Ngozi Ezike said in a news release. “Please, for our health care workers, yourself, and your community, keep distance between you and others, wash your hands, and always wear a mask when around people.”

IDPH reported another 46 virus-related deaths Tuesday, Oct. 27 bringing the total death toll since the pandemic began to 9,568. The 4,000 cases reported Tuesday were among 62,074 test results reported, making for a one-day positivity rate of 6.4 percent.

The statewide COVID-19 rolling positivity rate increased to 6.4 percent Tuesday, the highest it has been since June 2.

Chicago, which makes up Region 11, had a test positivity rate of 7.8 percent, according to the latest data, but it also saw increases in positivity rates and hospitalizations for at least seven of 10 days, which triggered the added mitigations.

Currently, Regions 1 in northwest Illinois, 5 in southern Illinois, and 7 and 8 in Will, Kankakee, Kane and DuPage counties are all under increased mitigations, with suburban Cook County and the Metro East on the Missouri border joining them starting Wednesday.

Region 3, which includes Springfield and several surrounding counties, increased to an 8 percent positivity rate, according to the latest data, and Region 9, including north suburban Lake and McHenry counties, increased to 8.4 percent – the second day above the threshold that would lead to increased mitigations for that region.

Region 2, including Peoria and several surrounding counties, had a positivity rate of 7.5 percent and Region 6 in east central Illinois had a rate of 7.9 percent.