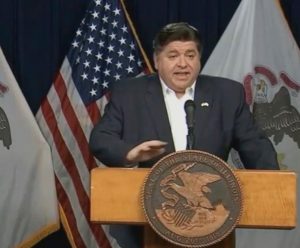 Gov. J.B. Pritzker speaks during a news conference Monday, April 6 in Chicago to provide an update on the state’s response to the novel coronavirus pandemic. (Credit: blueroomstream.com)

Gov. J.B. Pritzker said Monday, April 6 that state officials are “scouring the globe” for personal protective equipment, or PPE, as it prepares for the COVID-19 outbreak to peak in Illinois over the next two weeks.

Pritzker outlined those efforts during his daily coronavirus briefing in Chicago as the Illinois Department of Public Health announced 1,006 new confirmed cases of the disease over the previous 24 hours, and 33 additional deaths. All of those new deaths were in Cook County and the surrounding collar counties of Lake, DeKalb and Will. New confirmed cases were announced for the first time in downstate Jefferson and Wabash counties.

That brings the total number of cases in Illinois since the outbreak began to 12,262, including 307 deaths.

“Suddenly the website no longer said that the SNS would ‘support’ states, but instead now said that the SNS is meant only to supplement state supplies during public health emergencies and only as a short-term stopgap buffer when the immediate supply of adequate amounts of these materials may not be immediately available,” Pritzker said.

Those supplies are intended to protect health care workers and first responders who come into contact with infected patients. They include such things as face masks that can filter out the virus, as well as surgical masks and gowns, gloves, face shields and coveralls.

In the absence of adequate supplies from the federal government, Pritzker said state agencies have turned to national and global commercial markets for supplies.

“Take note that this is not as simple as placing an order and having it arrive at your doorstep a few days later,” he said. “There’s a worldwide shortage that has us racing the clock and battling against other states and the federal government. This is an ongoing around-the-clock process of scouring the globe to identify what PPE is available, reaching out to the producer with a better price and a faster payment than our competitors, overcoming the machinations of shipping across the world.”

According to the Institute for Health Metrics and Evaluation at the University of Washington, the pandemic is projected to peak in Illinois around April 15 when COVID-19 patients could occupy as many as 9,255 hospital beds in the state, including 1,853 intensive care unit beds.

Pritzker said that with the addition of open field hospitals around the state there are 28,000 non-ICU beds and 2,680 ICU beds statewide. IHME stressed, however, that its projections are uncertain and the actual numbers could be higher or lower.

IDPH Director Dr. Ngozi Ezike has said previously that only about 20 percent of COVID-19 patients require some form of hospitalization, including about 5 percent who require intensive care. The death rate is thought to be between 1 and 2 percent.

“Seventy percent of the individuals who have lost their fight against COVID have had a comorbid condition,” Ezike said. “The most commonly listed conditions were hypertension, diabetes and heart disease.”

Pritzker urged churches, synagogues, mosques and other places of worship to hold online services or some other form of remote meeting instead.

“There’s a funny term I’ve heard for Passover Seder, a ‘Zeder,’ a Zoom Seder,” he said. “And I think that we’re all going to be experiencing the holidays in a very unusual way this year. But it’s very important. I cannot reiterate this enough. It is very important that you stay home. It is very important that you do not gather in a place of worship or in somebody’s home with other families or even with your family if they don’t live with you. We’ve got to protect each other, and this will not last forever, but this is one Easter, one Passover that you’re going to have to do something unusual.”

Pritzker and Ezike, for a second straight day, wore surgical masks to the briefing in apparent accordance with new state and federal guidance to wear masks in public.

“We must wash our hands, keep practicing our physical distancing and wearing a covering,”Ezike said.