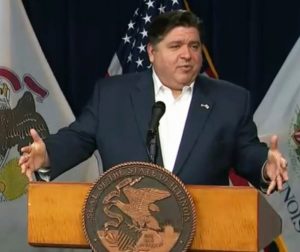 Gov. JB Pritzker answers questions from the media Tuesday in Chicago regarding a second lawsuit filed by a Republican lawmaker challenging his authority to extend the state of emergency and stay-at-home order in Illinois. (Credit: blueroomstream.com)

There are now 50,355 confirmed cases in the state, including 2,215 deaths. There have been 256,667 tests completed in Illinois. The latest deaths came in 15 counties across the state.

More than 5,000 patients were hospitalized due to COVID-19 as of midnight Monday, while 1,290 were in intensive care unit beds, according to officials.

Gov. J.B. Pritzker said the state recently received a shipment of more than 300,000 N95 masks and 500,000 KN95 masks from the Federal Emergency Management Agency. The state has distributed nearly 20 million pieces of personal protective items to hospitals, organizations and others across the state.

Pritzker also outlined increased efforts to protect long-term care facilities, where more than 600 people have died, including staff and residents, after contracting the virus at such a facility.

“We are working to test all residents and all staff for free at facilities, without known COVID-19 outbreaks, allowing us to identify early the presence of COVID-19 in a facility and to isolate those cases before widespread transmission,” Pritzker said.

He added tests are also being conducted at facilities with known outbreaks to identify people who should be isolated.

That policy started on April 19, Pritzker said, and since then, the state has distributed more than 18,000 testing swabs to 68 facilities.

He said the Illinois Department of Public Health has secured a special contract with Quest Diagnostics to run 3,000 tests per day from Illinois long-term care facilities at no cost to the facilities. Those results will be provided within 48 hours, he said.