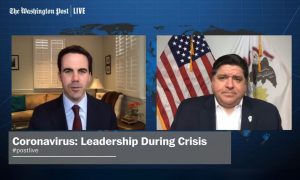 SPRINGFIELD — Gov. J.B. Pritzker said Tuesday the state’s COVID-19 peak could come in mid-May and he is examining the current stay-at-home order for potential changes.

The governor made the comments during a Washington Post Live interview with reporter Robert Costa.

Pritzker said people “have really been abiding by” the state’s second-in-the-nation stay-at-home order, which he said led to fewer deaths and hospitalizations than anticipated at this point.

“And so the result of that has been the pushing out of what had been anticipated to be a peaking in the middle or near the end of April, so it’s been pushed out now according to the models to maybe mid-May but at a lower level,” he said.

Pritzker was asked about differences in the Chicago area and downstate Illinois when it comes to fighting the virus, and he said there are different infection rates depending on region. That could inform changes to the stay-at-home order, the governor said, although he did not directly respond to a follow-up as to whether some counties might reopen before others.

“And now I think we can make some adjustments based upon hospitalization rates, based upon ICU bed availability, based upon infection rates, as we look to, how can we begin to adjust things and work toward — after the peak — really reopening the economy,” Pritzker said.

He was also asked about recent tweets from President Donald Trump calling to “liberate” certain states with Democratic governors.

“When he tweets out liberate Michigan or liberate Minnesota, or liberate Virginia, he’s fomenting protest and I hate to say that is fomenting some violence and I’m very concerned about what that might mean for the country if he keeps doing things like that,” Pritzker said.

The governor said the president “should be pulling people together right now,” and he noted recent protests of stay-at-home orders nationwide will likely lead to a wider spread of the virus, including more deaths among those who attended the events.

“They’re frankly going to be giving each other coronavirus and people unfortunately will get sick, and some people may die as a result of the president’s rhetoric that has brought them out to protest,” he said.

While Pritzker praised the federal government’s efforts to help set up an alternate care facility at the McCormick Place convention center in downtown Chicago, he said they fell short in other areas. He once again said Trump could have used the Defense Production Act to force greater manufacturing of testing supplies and personal protective equipment. He said Illinois received “maybe 10 percent” of what the state needed from the federal government in terms of PPE.

“None of that has been done at the federal government level,” he said. “That’s the mistake that has been made all along here, we could have organized this and led this on a federal level.”

The state’s five Republican congressmen responded Monday to a letter sent last week by Illinois Senate President Don Harmon requesting $40 billion in aid to the state, including $10 billion for the state’s pension system, which has an unfunded liability of $138 billion.

The GOP members hold five of Illinois’ 18 Congressional seats, and they said Harmon, D-Oak Park, should consider pushing structural reforms before requesting “aid that is beyond this immediate crisis.”

“We will fight for more aid to support the state and local governments in Illinois, but your letter assumes the federal government will approve aid that is beyond this immediate crisis,” the congressmen wrote. “For example, you suggest the state’s revenue loss will be approximately $14.1 billion, but your letter requests aid that is many multiples of the state’s loss projections. We fully support federal assistance to help defray some of the state’s losses, but we oppose using the crisis as an opportunity for a full-scale federal bailout.”

They said the pandemic did not cause the pension crisis in Illinois, but only “further illuminated the one that already existed.”

While the GOP members said they will “work with” the state to provide more resources, they said Illinois must reform its pension system, reduce spending and local government mandates, and “withdraw the graduated income tax increase to protect Illinois jobs that are already at risk from the pandemic and to stem the exodus of people and opportunity from our great state.”

Through a spokesman, Harmon pointed to an agreement passed in Congress late Tuesday for a $500 billion interim aid package for hospitals, health care workers and small businesses as proof that more aid is needed.

“As evidenced by the interim emergency package announced today, there are ongoing discussions in Washington on what economic relief should look like for workers, businesses, communities and institutions across this country,” Harmon said in a statement. “My letter reflects the real world needs of Illinois as we seek to rebuild and recover from this ongoing global pandemic that is destroying our economy.”

“While New Jersey, Kentucky, Pennsylvania, Rhode Island, Illinois and other states have implemented important reforms to improve the stability of their pension funds, the coronavirus stock market plunge has pushed a majority of state and local government pension plans below the 65 percent funding threshold that would be considered ‘at risk’ under the ERISA Act for private pension plans,” Sweeney said in a news release.