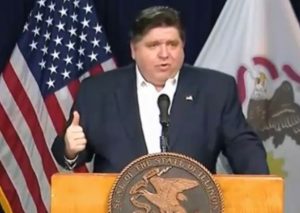 Gov. J.B. Pritzker explains that he prefers a northwest Illinois church that has been defying the stay-at-home order and holding services cease doing rather than forcing local law enforcers to make arrests. He spoke during a news conference Monday, May 4 in Chicago. (Credit: blueroomstream.com)

SPRINGFIELD – Gov. J.B. Pritzker said the state is making modest progress in terms of COVID-19 hospitalizations and that his stay-at-home order will continue to be enforced at a local, not statewide, level.

The Illinois Department of Public Health on Monday, May 4 reported 2,341 new cases, bringing the state’s total to 63,840. IDPH also reported 46 additional deaths – the lowest daily number since April 19 – related to novel coronavirus, bringing that total to 2,662.

“As to the number of fatalities today, I would just encourage everybody to look at these things on a multi-day basis, taking maybe a three-, five-, or seven-day average,” he said Monday during his daily COVID-19 briefing in Chicago. “When I saw this number today, I was hopeful that this was the beginning or, you know, a continuation of a trend that I’ve been praying for. … But I think one day is not a helpful number to look at.”

“I want to remind everyone that snapshots in time alone are not enough to offer a full understanding of where we are, but together they can offer some indication of how things are trending,” Pritzker said.

The governor noted that health department data shows the state is making progress on hospitalizations and ventilator use. The number of people hospitalized in Illinois with COVID-19 peaked at 5,036 on April 28, according to IDPH data, and dipped to 4,493 on Monday – the lowest total since April 18.

Additionally, the percentage of intensive care unit beds occupied by COVID-19 patients has decreased from 40 percent on April 19 to 33 percent on Monday. That is due in large part to an increase of more than 500 available beds during that span, as the COVID-19 ICU patients on April 19 numbered 1,239 as opposed to 1,232 Monday. The highest ICU hospitalization number thus far was 1,290 on April 28. 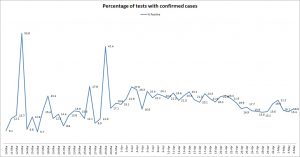 The percentage of COVID-19 tests with positive results daily in Illinois from March 10 to May 4. Data from the Illinois Department of Public Health. (Credit: Jerry Nowicki of Capitol News Illinois)

Pritzker also laid out hospital capacity in the state’s various medical regions – an indicator he said he uses to inform his decisions as to when to reopen certain sectors of the economy.

In Cook and the collar counties, available beds ranged from 11 to 18 percent, except in the northwest suburbs, where 38.3 percent of beds were available.

Pritzker said areas that don’t have many beds are of particular concern when considering economic plans.

“If there’s a significant spike in that area, 25 is not a big number,” he said. “And so what we want to make sure is that we were able to handle a spike, because that’s what you know potentially could occur if we reopen things too fast.”

There were 13,834 new tests for the virus completed in the past 24 hours, IDPH reported. That is a statewide positivity rate of about 17 percent, meaning it has reached into the 20s only once in the past 12 days. Prior to that span, between 20 and 26 percent of those tested each day from April 6 to April 22 were positive.

The state has reported more than 10,000 test results daily since April 24, although on Monday Pritzker said that despite that number being a long-stated goal, it is still not enough.

Pritzker said more testing is still needed in nursing homes, homes for the developmentally disabled, and other congregate settings such as prisons. He also said the amount of testing in Illinois is not enough to produce R-naught values – which show how many individuals one carrier of the virus infects – per region of the state.

While he said the existence of widespread contact tracing in the state is not a precondition for reopening the economy, he said it is “critically important” to limiting the spread of the virus. 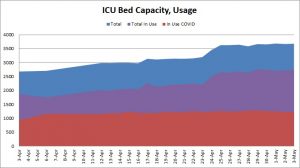 The graphic shows the state’s intensive care unit bed capacity over time from the beginning of April to May 3. Data from Illinois Department of Public Health. (Credit: Jerry Nowicki of Capitol News Illinois)

Pritzker also said while he is concerned that large gatherings – such as one reported at the Beloved Church in Lena over the weekend – will lead to spikes in cases of the virus, his priority is to still have local authorities enforce the stay-at-home order. A federal judge ruled this weekend that Pritzker did not overstep his authority in applying the order to churches in limiting worship to 10 or fewer people.

“We have always asked local law enforcement local officials to enforce these orders,” Pritzker said. “And the best way to do that of course is a reminder to the pastor and to the parishioners that they’re putting themselves and others in danger by holding a service like this.”

He added that the priority is to disburse the crowds.

“It’s not an intention that people will go to jail,” he said. “I will say, however, that if people are persistently defiant, they can be put in jail. And I’m not suggesting that that’s the best answer (or) the first answer, but it is something that’s an option for local law enforcement.”

Pritzker also discouraged Illinoisans from going to Indiana or elsewhere to utilize services that have opened there but not here, but he acknowledged “people are free to do what they want.”

Pritzker said Illinoisans will not need to wait until May 30 for full details of future plans to reopen the economy and loosen social restrictions.

“Certainly we’ve been thinking about this and working on it for some time now, to make sure that we’re going to give people a view into how the phases might work and how many phases there are and what would work in each phase,” he said.

He also cautioned that business owners and local municipalities defying the order could be opening themselves up to civil liabilities.

“I was a businessman before I became governor and I have to tell you that I would not want to defy the executive order because I believe that I would be taking on liability if I did that,” he said.