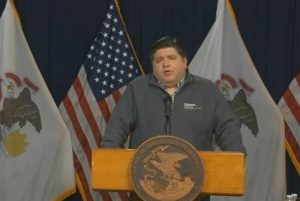 SPRINGFIELD – Illinois matched its deadliest day of the COVID-19 pandemic on Saturday as the state Department of Public Health reported 125 deaths in the previous 24 hours, matching Thursday’s record.

IDPH also reported 1,585 new cases of the disease, bringing Illinois’ total to 29,160 cases with 1,259 deaths. The novel coronavirus has been reported in 93 counties after Hamilton County in southern Illinois reported its first case on Saturday.

More than 137,000 tests have been completed, including more than 7,000 in each of the past two days. Gov. J.B. Pritzker has set a goal of 10,000 completed tests per day to get the most accurate picture of COVID-19 in the state.

“With more access to testing, we will learn of many more positive cases,” IDPH Director Dr. Ngozi Ezike said at Saturday’s daily coronavirus briefing in Chicago, the state’s 41st consecutive such news conference.

“Although our numbers continue to climb, it is with some guarded optimism that we say that the growth is slowing,” Ezike said, adding that Illinoisans “must continue to be strong and hold the line” when it comes to social distancing.

Pritzker said he has yet to decide whether to lift or extend the state’s stay-at-home order when it expires at the end of April.

On the question of possibly lifting the order on areas of Illinois that have seen much fewer cases than some hotspots, Pritzker said he understands the difference in caseloads between urban areas and rural areas.

“I’m looking at the data to try to make determinations,” he said, including “what hospitals are more available or less available.”

The White House’s coronavirus task force on Thursday released guidance for states to “reopen” in the form of a three-phase plan.

“There are aspects of that plan that I think are pretty good,” Pritzker said.

The governor said he believes Illinois is in Phase One, in which vulnerable people are advised to stay home; others should practice social distancing; businesses should telework; and schools should remain closed.

Pritzker said Phase Two of the White House plan, which includes reopening schools, large venues and some businesses, as well as resuming non-essential travel, can be discussed after the state hits its peak in cases and sees declining case numbers and hospitalizations for 14 days.

“I want to get there as fast as anybody does,” Pritzker said, adding that it is a balance between “saving lives and saving livelihoods.”

The governor added that he does not feel any pressure from President Donald Trump to reopen the state.

Pritzker also said that as of Saturday, Illinois has received less than 3 percent of the personal protective equipment it has asked for from the federal government, and the state continues to buy from private sellers instead.

Senate President Don Harmon sent a letter this week to Illinois’ Congressional delegation asking that they push for more than $40 billion in COVID-19 relief aid, including $10 billion to bail out the state’s indebted pension funds.

The Oak Park Democrat cited a study from the University of Illinois that estimated the state could lose $14.1 billion in revenue between 2020 and 2021 because of the pandemic.“Given the dire circumstances and consequences,” Harmon wrote, he asked Senators and members of Congress to consider, among other things, $15 billion in block grant funding; $9.6 billion in direct aid to municipalities; $6 billion for the state’s unemployment trust fund; and $1 billion to help minority communities.

Harmon also asked for $10 billion in relief for the state’s pension systems. Although “Illinois law has put the state on a path to fund the pension liability in a manner that is actuarially sound,” Harmon wrote, 2020 “will not be a normal year.”

Illinois’ unfunded pension liability is roughly $138 billion, and its annual contribution for fiscal year 2021 was expected to be about $8.6 billion from the general revenue fund, or nearly $10 billion from all state funds.

Pritzker said on Saturday that he was not aware of the content of the letter before it was sent out and that he does not object to Harmon sending it.

“It’s different than what I have been talking to the federal representatives about,” the governor said, adding that state governments across the country will feel the effects of COVID-19.

“Every state has this problem,” he said.

“While colleges and universities are doing all they can to help students during this pandemic, vulnerable students still face the unstable housing, food insecurity, or lack computer equipment and internet access,” Ginger Ostro, executive director of the Illinois Board of Higher Education, said in the release. “This fund will help meet those needs.”

The fund will be administered by the Southern Illinois University Foundation. All part-time and full-time students in good standing will be eligible for money, which will be given as grants that do not need to be paid back.

Students should contact their school directly for more information and how to apply.