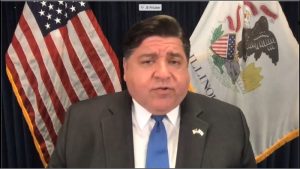 SPRINGFIELD — Testifying before the U.S. House Committee on Homeland Security on Wednesday, July 8 Gov. J.B. Pritzker said he would like to see a coordinated national COVID-19 containment strategy that requires people to wear masks, and he reiterated the need for a federal financial support package for states.

He was once again critical of the White House’s response in the early days of the pandemic’s arrival in the U.S., pointing to “broken promises on testing supplies and PPE (personal protective equipment) deliveries.”

“We were in a bidding war for life-saving supplies against each other and against our international allies,” Pritzker said of the effort to purchase supplies as other states were bidding on the same stock. “We were paying $5 for masks that should have cost 85 cents… In the midst of a global pandemic states were forced to play some sort of sick ‘Hunger Games’ game show to save the lives of our people.”

When asked about the response later, Pritzker said the president should have used the Defense Production Act earlier in the pandemic to compel U.S. companies to produce PPE and testing supplies.

The governor also suggested President Donald Trump has consistently contradicted guidance from the U.S. Centers for Disease Control and Prevention or muzzled public health officials. He also criticized the president’s recent call to open schools for the fall term without providing proper guidance.

Pritzker testified with local government and health officials from other states at the virtual hearing, and all of them said masks should be mandatory and a more unified federal response is needed.

While Democrats on the committee often criticized the White House’s virus response, Republicans were more defensive of the president, noting officials at all levels of government — from federal leaders to local ones — are dealing with an unprecedented crisis.

Rep. Dan Crenshaw, a Texas Republican, pointed to “dishonesty” among those testifying without offering any specifics as to who or what claims were purposely untruthful.

Pritzker’s testimony came as Illinois’ positivity rate for COVID-19 tests and hospitalizations for the virus remained low Wednesday. He touted the state’s effort to decrease cases before outlining a wish list for future federal response measures.

First is a coordinated federal mitigation effort: “That means more testing and more contact tracing. And it may even mean national restrictions that will be followed in every state,” he said.

He also urged federal aid for states, warning of impending “massive layoffs of public servants, teachers and firefighters” across the country if financial help does not materialize. He said “a bipartisan coalition of governors” was thankful to the U.S. House for passing the HEROES (Health and Economic Recovery Omnibus Emergency Solutions) Act, which awaits action in the U.S. Senate.

“Testing is not a one-off tactic. We need regular testing across our population. And that means people need to know that their insurance will cover their testing every time,” he said.

Later in the day, Pritzker announced the state — which was averaging around 30,000 test results reported daily — would increase its mobile testing capacity. He said 12 teams will offer mobile testing in hard-hit communities and visit facilities such as homeless shelters and nursing homes.

Another federal ask was for continued funding of National Guard operations “through next year in the face of a possible, maybe even likely, second wave.”

But the number one life-saving measure the federal government can take, Pritzker said, is a national mask mandate.

“We instituted ours in Illinois on May, 1…and it aligns with our most significant downward shifts in our infection rate,” he said. “It’s not too late for the federal government to make an impact. In fact, it’s more important than ever.”

While the state reported 980 new cases of COVID-19 Wednesday, the seven-day rolling positivity rate ticked back to 2.6 percent from 2.5 percent. It has remained below 3 percent since June 17.

The one-day positivity rate for Wednesday was 3 percent, as there were 32,742 test results reported in the previous 24 hours.

The 36 additional deaths reported Wednesday brought the number of fatalities related to the virus in Illinois to 7,099 among 149,432 confirmed cases. There have been 1.84 million tests completed in the state.

Hospitalization metrics also increased by the end of Tuesday, according to Illinois Department of Public Health data. As of 11:59 p.m. Tuesday, there were 1,518 hospital beds in use by COVID-19 patients, an increase of more than 130 from the day prior.

Intensive care unit beds being used by COVID-19 patients increased to 331 from 320, while ventilator use remained steady at 151.