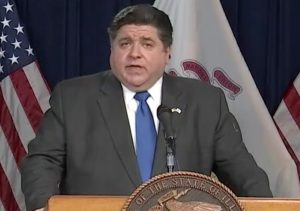 At his daily COVID-19 briefing on Dec.8, Gov. J.B. Pritzker said the first delivery of a vaccine could arrive in Illinois as early as next week. (iillinois.gov)

SPRINGFIELD – As COVID-19 infection rates continued to fall Tuesday, Dec. 8 Gov. J.B. Pritzker said the first delivery of a vaccine could arrive in Illinois as early as next week, although it could take several months before it is widely available to the general public.

Speaking at his daily media briefing in Chicago, Pritzker noted that the U.S. Food and Drug Administration had released its analysis of data on a vaccine developed by the pharmaceutical companies Pfizer and BioNTech.

Although the state of Illinois is having its own independent team review the data, Pritzker said the vaccine appears to be effective in 95 percent of the people who receive it, and in 94 percent of people over age 65.

“Illinois will only distribute a vaccine that is deemed safe, and we are one of many states that have established additional review panels, including Indiana, California, New York, West Virginia and Michigan,” Pritzker said. “Our Illinois team is already poring over the analysis released by the FDA on the Pfizer-BioNTech vaccine this morning.”

An FDA review committee is scheduled to meet Thursday, Dec. 10 to decide whether to grant the companies Emergency Use Authorization to release the vaccine. If that happens, he said, the first shipment could arrive in Illinois next week.

The drug company Moderna has also applied for Emergency Use Authorization for a vaccine it is developing.

Bonnie Blue, 68, of Chicago, who has suffered from severe asthma much of her life, was among the people who took part in clinical trials of that vaccine. She spoke at Tuesday’s briefing to encourage everyone to get the vaccine once it becomes available. 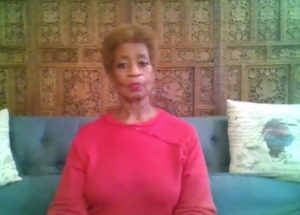 “For a person who has been on life support so many times, for me to take part in this trial was a huge risk, a risk that my family and friends were not happy that I was taking,” she said. “But I am here. I’m fine. I did not have horrible side effects from anything.”

Illinois Department of Public Health Director Dr. Ngozi Ezike said it could take as long as a year for the vaccine to reach everyone in Illinois. She said the first priority will be health care workers and residents of long-term care facilities.

“We can only allocate the vaccine that we’re actually given, so we’re prioritizing those at greatest risk of exposure and severe illness,” Ezike said. “And then we will continue to move through those established priorities. I hope people will understand that yes, there will be people that get the vaccine before you, but we are hoping for everyone to get this vaccine in the coming year.”

Meanwhile, the Illinois Department of Public Health reported Dec.8 that the state’s COVID-19 case positivity rate fell below 10 percent for the first time in a month.

IDPH said 7,910 new confirmed and probable cases of the disease out of 95,825 tests performed, for a single-day positivity rate of 8.3 percent. The seven-day rolling average positivity rate dropped to 9.9 percent, the lowest rate recorded since Nov. 6.

That raised the total number of cases recorded since the pandemic began over the 800,000 mark, to 804,174 out of more than 11.2 million tests performed.

IDPH also reported 145 additional deaths over the previous 24 hours, bringing the total number of deaths from COVID-19 in Illinois to 13,487.

As of late Dec. 7, 5,199 Illinoisans were reported hospitalized with the disease, including 1,071 patients in intensive care units and 626 of those patients on ventilators.