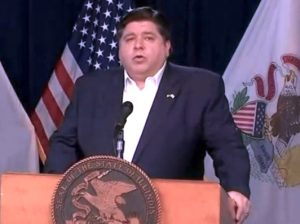 Gov. J.B. Pritzker warns Thursday, Nov. 5 of even more social and economic restrictions being imposed statewide if the increasing rate of COVID-19 transmission in Illinois is not reversed. (Blueroomstream.com)

SPRINGFIELD – Gov. J.B. Pritzker warned Thursday, Nov. 5 that additional social and economic restrictions may need to be imposed statewide in the near future if the surge in new COVID-19 cases continues on its current path.

“If the current trajectory continues, if our hospitals continue to fill up, if more and more people continue to lose their lives to this disease, we’re going to implement further statewide mitigations, which nobody — and I mean nobody — wants,” Pritzker said during his daily briefing in Chicago.

That warning came as the state passed another grim milestone in the pandemic with 97 virus-related deaths recorded over the previous 24 hours, pushing the statewide total since the pandemic began to 10,030.

The Illinois Department of Public Health also reported 9,935 new cases of the disease, by far the highest single-day total recorded so far, bringing the total number of cases recorded in Illinois since the pandemic began to 447,491.

Hospitalization rates have also been climbing in recent weeks. As of late Wednesday, Nov. 4, 3,891 people were reported hospitalized in Illinois for COVID-19. That included 772 in intensive care units and 343 patients on ventilators.

Pritzker was not specific about what kinds of additional measures could be imposed, but he alluded to all of the restrictions that were in place during earlier phases of the pandemic, which included mandatory remote learning for all pre-K through 12 schools, stricter limits on the size of public gatherings and capacity limits in retail stores.

“I think we all remember what Phase 3 looked like, or Phase 2 looked like. Those are all things that are under consideration,” Pritzker said.

Currently, all 11 regions of the state are under some level of enhanced mitigation measures, including the closure of bars and restaurants to indoor service, because of rising test positivity rates and hospital usage. As of Thursday, Nov. 5, the statewide preliminary seven-day average case positivity rate stood at 9.1 percent while Region 1, in northwest Illinois, was posting the highest rate at 15.8 percent.

A return to increased restrictions can be avoided, Pritzker said, if the trend lines in new cases and hospitalizations are reversed. But he said the only way that will happen is if individuals follow, and local officials enforce, the guidelines currently in place.

“Far too many local governments across the state are failing to enforce any mitigation measures, allowing this continued rise in positivity to balloon out of control,” he said. “It’s time to take some responsibility. That’s the only way that we will get out of this without having to implement more and more restrictions across more industries and across the entire state.”

The enhanced mitigations already in place, however, appeared to be taking an economic toll on Illinois. The U.S. Department of Labor reported Thursday that 76,338 Illinois workers filed first-time unemployment claims during the week that ended Saturday, Oct. 31. That was an increase of 43 percent over the prior week.

There was also an increase in new claims for Pandemic Unemployment Assistance, the federally-funded benefit program for gig workers and others who don’t normally qualify for traditional unemployment benefits.

When asked whether the Illinois Department of Employment Security was prepared to deal with another surge in unemployment claims, Pritzker insisted the agency is in a better position than it was in the early phases of the pandemic.

“Let’s be clear. Travel will increase your chances of contracting and spreading COVID-19, as well going to a crowded event, as well having multiple people in your home for Thanksgiving,” Ezike said. “So, in terms of travel, we do recommend avoiding travel to areas of higher risk. But as you are seeing, that is almost everywhere. That includes essentially every county here in Illinois. That includes almost every state in the United States and many countries around the world.”

How do you convince stubborn loved ones to take COVID-19 seriously?